I was at my desk Monday when an alert came over Twitter that Moby would be appearing on WNYC's Soundcheck that afternoon -- the perfect salve after being spurned by Arcade Fire over the weekend. As a fan across the decades, I also take great pride that he grew up in my current hometown of Darien, CT.  So I was thrilled about the opportunity to interview Moby out in his new home turf of L.A. before releasing his last album, Destroyed, in 2011. (For a nice update, visit this recent interview by my PopMatters colleague, Sachyn Mital, at the link here.)

Listening in to Soundcheck, Moby chatted with host John Schaefer about composing his latest work and life in the year-round warmth of sunny California -- even mentioning how he was East to attend his high school reunion this weekend.  He also talked about growing up "poor white trash" in Darien and the music scene back in the early 80s, with nostalgic nods to influences and what it was like being a music fan back then, without 24/7 access to bands.

I currently have his new album, Innocents, on heavy rotation (his eleventh!)  It is full of interesting musical collabos, Cold Speck's Skylar Grey, Damien Jurado, Mark Lanegan and my favorite, Wayne Coyne of The Flaming Lips. But for this live studio appearance he brought along his usual powerhouse vocalists, the very dedicated Kelli Scarr and Inyang Bassey.  Violinist Claudia Chopek and Daron Muphy's harmonica rounded out the stripped down arrangements of songs old and new, with Moby leading things on guitar.  For "The Perfect Life," Moby encouraged the small audience to join in, even his baby goddaughter.  Of course, I couldn't help singing from my home office too.

Listen to the entire show at the widget below. 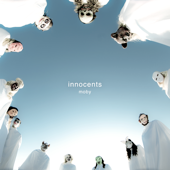