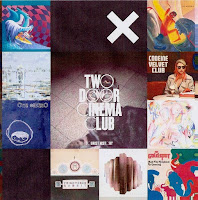 I wasn't sure whether to call this Late Spring or Early Summer Playlist with all the summery sounds and laid-back vibes within the songs that made the cut. But with new releases by the bands in the last post about free album previews (The National, New Pornographers and Minus the Bear) the next list is filling up quickly in time for summer listening. Link here to listen, enjoy!

1. It's Working/MGMT
2. Flash Delirium/MGMT
The second release Congratulations from this hip duo has certainly not been embraced by all fans or critics alike -- I actually heard an editor of a music pub describe the new concept album as having "nothing to dance to" which I think is just plain laziness. It might not have a huge breakout single or two like the debut Oracular Spectacular but there are plenty of grooves throughout to get the body moving, if so willing of course. The surfer splash of "It's Working" rolls out the attitude full throttle and the second selection "Flash Delirium" expands into the Neo-Psychedelia sound the band has become so famous for yet again.

3. Kandi/One eskimO
One eskimO is a indie band from the UK fronted by Kristian Leontiou who took the trappings of fame with a top ten hit there and created a new band that would venture away from the mainstream. This song fits the bill with its individualistic take what seems at first listen a love song though it's actually about the heartache over love lost.

4. Call Center Girl/Goldspot
Siddhartha Khosla, the singer/songwriter who founded Goldspot, was born in the US to parents from India and he spent a few years there as a young boy. He has a cousin who works at a call center in India, providing a nice backstory about love over the phone line for this sweetly swinging tune from the LA band.

5. Hollywood/Codeine Velvet Club
This new Scottish band presents Jon Lawler of the Fratellis with singer Lou Hickey, a friend of his wife's who also works in burlesque clubs. They share an affinity for 60s duets along with vintage orchestral pop and outfits. A rollicking back up band provides the instrumentation necessary to complete the vision.

6. Swim Until You Can't See Land/Frightened Rabbit
Frightened Rabbit is another band from Scotland, though embracing the indie folk/country label. This is a single off their third album called "Winter of Mixed Drinks" though it was this song title that came to vocalist and guitarist Scott Hutchinson. He thought "Swim Until You Can't See Land" indicated a personal journey rather than a physical one.

7. Percussion Gun/White Rabbits
I actually thought these two 'Rabbits' bands were one in the same -- their musical approach is similar but this American band is based in Brooklyn with the rest of the indie scene though they are originally from the college town of Columbia, Missouri. "Percussion Gun" is a single released last year and from the opening laughter to the drumbeat/percussive keyboards the song sounds like a tightly knit live performance.

8. What's In It For?/Avi Buffalo
I'd say what's with really young bands embracing sounds of bands from decades before yet managing a hip take on it all? Here's a prime example from a Long Beach, California band barely out of high school. Avi is short for Avigdor Zahner-Isenberg, a skateboarder who picked up guitar along the way and started writing songs. Taking lessons from local blues guys is a revealing bit of trivia as old meets new in "What's In It For."

9. Undercover Martyn/Two Door Cinema Club
10. I Can Talk/Two Door Cinema Club
11. Eat That Up, It's Good for You/Two Door Cinema Club
Another very young band, Two Door Cinema Club, has been on my playlists before but these three are off their first full length CD. The title, Tourist History, refers to their hometown of Bangor, Scotland as a tourist destination as well as the band's recent busy traveling agenda. When a drummer dropped out, the band decided they liked the sound of manufactured drum tracks just fine. Each song is a carefully crafted romp with fun shout outs and walls of electronic sound.

12. Plain Material/Memory Tapes
This is a song from on a compilation found on the Urban Outfitters website of bands making a splash at this year's SXSW. It's off the CD Seek Magic by New Jersey based Dayve Hawk who also creates music under the monikers Memory Cassette and Weird Tapes. I just love the way the chorus bursts out of the dry drums and buried vocals to make this song bounce along, a individualist musical vision which caught my attention at first listen.

13. Islands/The XX
14. Crystalised/The XX
This young three piece UK band was basically crowned the darlings of SXSW with their understated, laid-back compositions. During a live session from Austin, a listener sent a tweet to actually ask why the band sounded so sexy (which they did not have to answer, if they knew I'm sure they'd bottle it up for all!) Perhaps it's because the tracks were recorded in a small garage at night, but now the band has songs on TV shows, commercials and is off on tour playing all the big festivals.

15. Drunk Girls/LCD Soundsystem
16. All I Want/LCD Soundsystem
17. You Wanted A Hit/LCD Soundsystem
LCD Soundsystem's James Murphy sings about having to provide a sellable single in the spaced-out track "You Wanted a Hit" but with "Drunk Girls" he easily complies with the request. It's quick, catchy and with sing-a-long lyrics touting the male/female bond of easy virtues. "All I Want" is deeply romantic, echoing Psychedelic Furs or early David Bowie with the swooning guitars which take center stage in front of the sweetly sung vocals.

18. Stay Close/Delorean
This song is off the third studio release by this four piece Spanish alternative dance band. The name of the CD, Subiza, is from the Navarre town in Northern Spain where they record but their love of layering synths for the dance floor is universal. The vocals on "Stay Close" almost sound as if they've invited Animal Collective to their party and I'm happy to join in as well. Get up, get up!

Here's an impressive triple play of album previews for your listening pleasure: The National, New Pornographers AND Minus the Bear! Not sure what all this free music is doing for sales but if it's out there to be enjoyed, why not indulge?

The National's new CD, High Violet is available May 3rd - May 16th at the link below (release date is May 11th). Coming off a huge write up in The New York Times Magazine and embarking on a mega tour beginning in London May 5th supporting their fifth offering, The National might not just be critic fav indie darlings anymore. The guys grew up in Cincinnati but are now based in (where else) Brooklyn -- the line up includes two sets of brothers Bryan and Scott Devendorf along with Aaron and Bryce Dessner, who are even twins. Just listening to lead vocalist Matt Berninger's deep baritone singing over this group's mellow music makes my shoulders drop instantly into relaxation. The lyrics are always worth investigating, whether they're referencing Dostoyevsky or ruminating over poetic imagery.

Next up is another indie powerhouse -- the New Pornographers's 5th studio release Together, offered until May 9th. I loved their last CD from 2008 Challengers but this band of eight musicians from the Vancouver music scene has been collaborating since 1997. Carl Newman shares lead vocals with Dan Bejar and the distinctive voice of Neko Case. It was Newman that found the name of the band after watching a Japanese film called "The Pornographers." The CD also features collabos with St. Vincent, Beirut's Zach Condon and Okkervil River's Will Shef.

The last in the group, Minus the Bear's Omni, is on the site through May 18th with a CD that was released May 4th. It's the Seattle band's fourth full length release with a solid group of five guys who like to venture away from the indie rock label, pushing the limits of experimentation into prog rock's inventive time structures. The name comes from an incident when a friend joked that his date was like the 70s TV show "B.J. and the Bear" -- minus the bear. For this CD, the band wanted to capture the live energy of playing together as much as possible during the recording process and it shows. I love the opener, "My Time" with its synths playing off a solid grove provided by the drums before the journey happily continues.

Posted by JaneJS at 6:42 PM
Email ThisBlogThis!Share to TwitterShare to FacebookShare to Pinterest
Labels: Minus the Bear, The National, The New Pornographers
Newer Posts Older Posts Home
Subscribe to: Posts (Atom)