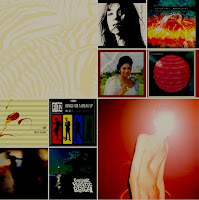 Welcome Spring and a bounty of new releases to pour through for a new playlist... link to listen here.

1. Stylo featuring Mos Def & Bobby Womack - Gorillaz
Waited five years for another Gorillaz offering -- this one seems much more Daman Albarn's universe of sound, seems like he's no longer hiding behind the cartoon character concept or leaning heavily on producer's input (mainly Danger Mouse who's been working with James Mercer of The Shins as Broken Bells, see below). He brings in a full range of colabos as evidenced in this funky tune with rapper Mos Def with R&B soulman Bobby Womack. Perhaps this is a by-product of the congenial Blur rockin' come back appearances in the UK last year? Whatever it is, I'm game.

2. Good Morning (The Future) - Rogue Wave
This upbeat song is off the newly released CD (#4 from the CA indie band which has been featured on movies, commercials & TV shows as in poignant moments on the OC). The group began as an alternative career for leader of the band Zach Schwartz (a.k.a. Zach Rogue) after the dot-com bust -- he bought a one way ticket to NYC to record a few songs with friend which translated into a debut CD. This song is overly accessible with a catchy, poppy vibe but I can't resist it even after multiple listens.

3. Walkabout (With Noah Lennox) - Atlas Sound
4. Quick Canal (With Laetitia Sadier) - Atlas Sound
Atlas Sound is the side project of Bradford Cox, lead singer of Deerhunter, since he was ten. Living with the genetic disorder Marfan syndrome manifested a solitary existence growing up in Atlanta, GA so music was his refuge -- there are supposedly boxes of tapes full of tracks under this moniker tucked away. These newest stream of consciousness creations constructed without his band are awash in emotion, first with Noah Lennox of Panda Bear and then Laetitia Sadier of Sterolab.

5. Heaven Can Wait - Charlotte Gainsbourg
6. IRM - Charlotte Gainsbourg
Actress/Singer Charlotte Gainsbourg teamed up with Beck for her 3rd CD titled IRM which is the French translation of an MRI, a treatment she experienced many times after a cerebral hemorrhage during which she'd think about music as an excape. Gainsbourg's lineage in an extremely successful arty family (actress mother, composer/singer father, even a screenwriter uncle) allows an openness and funds to try different genres but thinking that bringing 90s wonder boy Beck on board is pure brilliance -- not only his sweet back up vocals on the first tune but the production on IRM is absolutely masterful.

7. Zebra - Beach House
8. Norway - Beach House
9. 10 Mile Stereo - Beach House
The band Beach House actually embraces the term "dream pop" for their music with this third album release. The duo was formed in 2004 in Baltimore by native Alex Scally and French-born vocalist Victoria Legrand (who is also heard on the Grizzly Bear tracks). Supposedly the song "Norway" was created to fulfill a request for a saleable 'single' and it seems to have hit the spot. I don't care how it came about, it's a great song.

10. Breakin' the Chains of Love - Fitz and The Tantrums
I heard about this group through my weekday new music fix on Morning Becomes Eclectic as they were featured in a live session which they totally rocked with a huge party attitude despite it being before noon in LA. Fitz & crew flaunt the new trend in retro blue-eyed soul to perfection -- I dare anyone not to move when this song is playing!

11. Please Don't - David Byrne & Fat Boy Slim (featuring Santigold)
Santigold totally owns this song about Imelda Marcos' response to the world problems which is part of the new project between David Byrne and Fat Boy Slim. Check out the great videos (6 were compiled of news clips of the woman's "handbag diplomacy" in action) for this kick-a dance tune over a rollicking rhythmic track.

12. Them That Do Nothing - Field Music
13. Measure - Field Music
This band of UK brothers, David and Peter Brewis, marks a return to the band after two CDs and time off for solo projects. These tracks are both rich in influences (I'm hearing XTC and 70s bands like Steely Band) yet creative enough to make for extremely worthwhile listening.

14. Vaporize - Broken Bells
15. The Ghost Inside - Broken Bells
Here is Danger Mouse with James Mercer of The Shins sounding more like the Gorillaz then the Gorillaz's new CD in "Vaporize" and providing a sunny CA sensibility to the moodier Mercer. Another collection worth a purchase from this pair that met backstage during a festival in 2004 -- hope they can find more time in the future for more studio sessions soon!

16. What Would I Want? Sky - Animal Collective
I just love this lilting tune lifted up by the synth intro, heavenly really. It boasts a historical moment by using the first sanctioned Grateful Dead sample: Phil Lesh's sweet vocals off his song "Unbroken Chain" from the Mars Hotel album in 1974. Animal Collective is a collaborative group originally from Baltimore but now based in NYC, featuring Noah Lennox of Panda Bear and a loose line-up of friends. The band makes the lyrics all their own, scrambling the words and creating a wonderful sentiment, who wouldn't want sky?

This has got to one of the best deals of the season, an album preview for the highly anticipated collaboration called Broken Bells before it hits the shelves March 9th. When I heard the single "The High Road" for the first time last fall, the voice of The Shins' James Mercer was instantly recognizable. It's the opening track here and the second one, "Vaporize," is my new favorite. There's something sunnier and slightly funkier than the usual laid back Shins sound. Danger Mouse brings a hip producer's ear to the layers of music in each tune and maybe recording in LA has lightened the mood. It's a match only backstage access can create -- the two met while both were performing at a festival back in 2004. Some songs start out sounding like classic Shins tracks but then veer in a different direction without a road map. Others are completely different all the way through. With a running time less than 40 minutes Broken Bells definitely left me wanting more, especially with the last track's ending chords of sonic bliss. You can listen to it through March 30th at the link below: