Franklin Street Works Contemporary Art Space & Cafe in Stamford, CT provided the locale for Moby's homecoming on his current book tour for "Porcelain: A Memoir." He was born in NYC, then spent a childhood in my town of Darien before spending formative years squatting in one of this city's neglected factories and making a name as a DJ. I must have crossed paths with him during the 80s in Port Chester's club known as The Beat, but more recently we have connected in L.A. at the New Music Seminar (where I interviewed him for PopMatters) along with local talks, live concerts and Asheville's Moogfest 2011 festival. 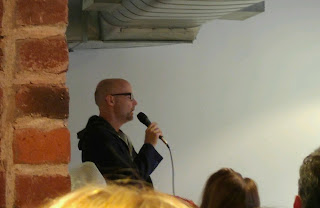 From the passages shared at the event, the book rambles in Moby's stream of conscious style found on his website and multitudinous social media posts, peppered with a vocabulary formed during his affluent upbringing. Though living on the edge of society, Moby respects his mother's decision to return to Darien where her parents still lived and her son could reap the benefits of an excellent public school system.  And one of my favorite things about Moby, besides his musical gifts that I consider My Essential Music - Fave Band Playlists, is that he never throws Darien under the bus. I grew up a bit down the gold coast of CT and one of the best lessons I learned surrounded by wealth is money can't buy you love, or happiness for that matter. As similarly Moby explained in his Q & A after the reading, he defines happiness as being able to do simple things like "playing with a dog" or "eating an orange," having realized that wealth sometimes inhibits joy rather than bringing it.

The book covers the decade 1989 through 1999, and when it was our turn in line I asked if it was just volume one, since there was so much more to tell about being an music industry icon. He suggested it might be and I told him that was a very good thing. There's also a "Porcelain" playlist on Spotify with audiobook samples and a release planned for June 10 that pairs re-mastered Moby songs with inspirations at that time (see track list below).

L.A. based indie rock band Local Natives is back with a new song, "Past Lives," its first since 2013's sophomore album Hummingbird. This tune startles the listener into submission with a spare hymn-like intro of Taylor Rice's soulful singing "Save me." Then the music builds, adding pulsating rhythms and pleading guitar lines to create a familiar, complex instrumentation by the group until it all ends just as abruptly.

Rice elaborates, "The world is not static, it's made new over and over again. But we tend to live the same patterns in a loop, loving the same way, wrestling the same demons, the same dynamics playing out around us again and again. Untangling every moment and decision that led us to where we are now can make fate feel concrete, inescapable. But our world is not fixed, it's constantly reemerging, and we can change it into whatever we want." Take a listen via YouTube and be on the lookout for a new album soon.

Posted by JaneJS at 11:22 AM
Email ThisBlogThis!Share to TwitterShare to FacebookShare to Pinterest
Labels: Local Natives, Past Lives, Taylor Rice 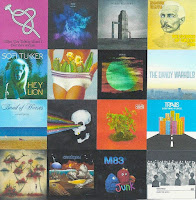 Here is another listening session of new music released this spring, full of heavy-weight veterans such as Radiohead, Travis, The Dandy Warhols and Peter Bjorn and John plus new bands such as LNZDRF, Bayonne and Sofi Tukker. There’s also some country twang found in White Denim, Frightened Rabbit and Band of Horses along with some fuzzed-out indie songs from Autolux, Caveman and Cullen Omori. Listen on Spotify or as a YouTube Playlist.

1. “What You Talking About?” – Peter Bjorn and John
Swedish indie pop band Peter Bjorn and John is ready with a seventh album since 1999, Breakin Point, full of hook happy tunes like the lead single, “What You Talking About?”  With a blast of feel-good synths that sound like a cheery whistle, the song bounces along even while bemoaning issues of communication.

2. “Cinnamon” – Cullen Omori
Chicago’s Cullen Omori (formerly of Smith Westerns) continues on a similar course solo with psych pop leanings for his solo debut, New Misery. The melodic song “Cinnamon” cleverly skims the surface as he sings about the euphoria of finding love.

3. “Get Out” – Frightened Rabbit
Scottish quintet Frightened Rabbit recently released a fifth album, Painting of a Panic Attack, produced by Aaron Dessner of The National.  The band formed in 2003 and took a break after a long tour in support of the last album, 2013’s Pedestrian Verse, but returns to continue the journey with gritty, soulful indie rock.

5. “Thank You” – White Denim
Austin rockers White Denim had to reinvent itself after two band members left, so singer James Petralli likens the new album Stiff to a debut release although it counts as number seven since 2006. The song “Thank You” finds the group’s roots rock intact, while the new kicky sound brings a new energy to the music.

6. “Burn the Witch” – Radiohead
English indie supergroup Radiohead lives up to the hype for its first song in five years, “Burn the Witch,” an epic swirl of strings, pulsating rock rhythms and singer Thom Yorke’s plaintive vocals. It serves as the single and title track for the group’s ninth album since 1985, the first in five years after 2011’s King of Limbs.

7. “Styggo” – The Dandy Warhols
The Dandy Warhols, Portland’s alt rock juggernauts, has released its ninth album called Distortland. The tune “Styggo” chugs along with the signature swagger of singer Courtney Taylor-Taylor’s vocals and confidence galore amid this quartet.

8. “Lates” ­– Bayonne
Bayonne is the music project of multi-instrumentalist Roger Sellers, who likes to call it electronic/minimalist material. “Lates” is a dreamy track off the debut full length album, Spectrolite.

9. “Magnificent Time” – Travis
Scottish indie stalwarts Travis is ready with its eighth studio album since 1990, Everything At Once.   This carefree single, “Magnificent Time,” is fueled by a enthusiasm that other bands might find hard to fathom otherwise.

12. “Hey Lion” – Sofi Tukker
New York-based duo Sophie Hawley-Weld and Tucker Halpern has made an impact on the strength of singles such as “Hey Lion,” a funky dance tune with a sparse instrumentation and sexy vocals. A self-titled EP is planned for later this year.

13. “Solitude”­ – M83
M83 is a French-American electronic music band led by Anthony Gonzalez, now based in L.A. The cinematic tune “Solitude” is the second single off Junk, a seventh studio album for the group since 2001.

14. “Beneath the Black Sea” – LNZNDRF
LNZNDRF, a new band touting post-punk and Krautrock influences, was formed by Ben Lanz (member of Beruit and collaborator with The National) and brothers Bryan and Scott Devendorf (both of The National).  “Beneath the Black Sea” is one of eight songs on the self-titled debut improvised and edited down from the recording session’s 30 plus minute jams.