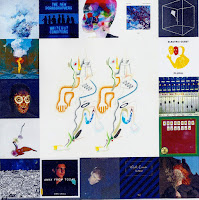 Spring has arrived early ­ – and I don’t just mean the recent unseasonably warm spell of weather here in the Northeast. There’s enough new music to fill up another listening session with tunes by indie stalwarts Spoon, Arcade Fire and The New Pornographers, plus Father John Misty, Future Islands and Mew.  Slowdive returns after decades while new band Day Wave drops a single off an upcoming debut. Music also incites action by soliciting donations for organizations jeopardized by the new administration. And check out the new collaboration known as BNQT featuring playlist faves along with bands such as Animal Collective, Goldfrapp and more. Listen up on Spotify or as a YouTube Playlist.


1. “Hot Thoughts” – Spoon
This is the single and title track for the ninth album from Austin’s indie rock band Spoon. The band was formed by lead singer/guitarist Britt Daniel and drummer Jim Eno back in 1993, but shows no sign of slowing down. Producer Dave Fridmann returns after 2014’s They Want My Soul, continuing to push this group’s gritty approach into a wider experimental arena.

4. “I Give You Power (featuring Mavis Staples)” – Arcade Fire
Montreal-based band Arcade Fire released this stand alone single to coincide with the Trump inauguration, with all proceeds donated to the ACLU in protest. “I Give You Power” is highlighted by the powerhouse vocals of Civil Rights icon Mavis Staples, bringing the issue a needed urgency.

5. “Away from Today” – Dan Croll
British singer/songwriter Dan Croll has a powerful command of the pop music idiom, having attended the Liverpool Institute for Performing Arts founded by Paul McCartney. “Away from Today” boasts a sweeping melodic structure, complete with horn section, to ready fans for the next album since 2014’s debut.

6. “Break Apart (featuring Rhye)” – Bonobo
Bonobo is the stage name of British musician, producer and D.J. Simon Green, who brings L.A.’s R & B musical duo Rhye on board to flesh out this lilting tune. It is found on Migration, the sixth studio album since 1999.

8. “Ladada” – Dr. Dog
Philly area based Dr. Dog recently offered up an entire surprise album on Bandcamp with proceeds going to the Southern Poverty Law Center – titled Abandoned Mansion, the group’s tenth release since 1999.  The shared vocals of Toby Leamon (bass) and Scott McMichen (lead guitar) impart a musical earnestness to everything the band does in studio or on stage.

10. “Peacemaker” – Animal Collective
Experimental pop band Animal Collective just released its eighth EP, The Painters, since forming in Baltimore back in 2003. It serves a companion to the recent studio album, Painting With, as “Peacemaker” challenges the listener to follow down another winding, wonderful musical path in song.

11. “Ballad of the Dying Man” – Father John Misty
Father John Misty (a.k.a.  singer/songwriter Joshua Michael Tillman) is ready with a third studio album in his solo career, Pure Comedy. He recently wrote to fans that it “is the story of a species with a half-formed brain” but his music is always a worthy listen no matter what the subject.

12. “Something Here” – Day Wave
Day Wave is the musical project of Jackson Phillips, who enlists touring musicians for live shows yet the fully-formed tune “Something Here” belies the newly arrived band. It is a single for his upcoming debut album called The Days We Had.

13. “Restart” ­– BNQT
“Restart” is the single and opening track for Volume 1, a debut album coming in April for the new supergroup with Fran Healy (Travis), Ben Bridell (Band of Horses), and Alex Kapranos (Franz Ferdinand), along with Jason Lytle (Grandaddy) plus three members of Midlake.  With such a stellar lineup, the song pulls off confident swagger from the opening note!

14. “Anymore” – Goldfrapp
Goldfrapp is the English electronic songwriting duo of Alison Goldfrapp (vocals, synths) and Will Gregory (synths), who record under a mantra that music is a visual experience. “Anymore” struts along with buzzy underpinnings as the single for the band’s upcoming album Silver Eye, its seventh since 1999.

15. “Dear To Me” – Electric Guest
L.A.-based electric pop band Electric Guest is ready with a second album, Plural. (It was formed in 2011, although this easy breezy tune “Dear To Me” served as my introduction.) The group is made up of Asa Taccone (vocals, instrumentals) and Matthew Compton (drums) plus brothers Todd (bass) and Tory Dahlhott (keys and guitar).

16. “Carry Me To Safety” ­– Mew
Danish alternative rock band Mew will release its seventh studio album, Visuals, next month. This gorgeous and expansive composition, “Carry Me to Safety,” serves as the single as well as the closing track, buoyed as always by Jonas Bjerre’s sweet voice.

17. “Fallss” – Bayonne
Bayonne is the stage moniker for Austin’s Roger Seller, who has performed under the name since 2015. He explained that he wrote this delicate song for an upcoming album during an emotional time when he was “striving for growth and getting better as a person and song writer.”