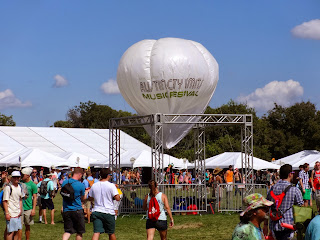 Returning home (reentry if you will) after a trip is never easy, but my head is still swirling after going to the ACL Music Festival 2013. We didn't even make it far from the hotel to park and back, although we had plans and grand visions to do so during our long weekend in Austin. Since it was my first time to the state, there was much to take in, from the fossil like rocks on the ground to the unusual bird calls from the cedar elms above. I especially loved the mid-century modern buildings in the city, with their neon signs and funky details. At times it definitely felt as hot as Texas, as my sunglasses heated up just by sitting on my head and I was "glowing" as my Southern mother would say.  Yet who can really complain, when the sunny sky made such a cheery backdrop to the park venue. 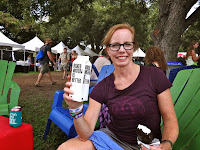 The festival fare was just amazing -- the food truck mentality is definitely my kind of noshing.  These delicious, quick bites available at booths were easy to fill up on until the next break in your schedule: tacos/tamales, BBQ, and fried chicken (yum y'all!) I also learned to truly enjoy a frosty, cold beer from a can and that water can come from a carton (as it says on the side here, boxed water is better!)

Yes, the crowds were crazy large at times. We knew that would be the case but it's different to be in the middle of all of it.  A quick walk could turn twice as long, in order to wade through the throngs. It certainly made for interesting people watching, as people came in capes and costumes donned in Mexican Sombreros or Panama hats. I was surprised at all the band t-shirts, a decidedly uncool thing up North, although I love merch of any kind. There were bands of all genres and level of hipness, worn by proud fans of all ages. I also spotted plenty of Star Wars references and clever sayings ("Keep Calm & Chive On" and "Pluto: Never Forget" for example). We even saw two gals in Giants football jerseys, to which my camera guy Paul said, "Way to stand out in this crowd" since we were in Dallas Cowboys territory.  With all the music going on, there was a tent full of people in front of the TV with that team playing what turned out to be a heart-breaking loss.

As far as concert watching, it really was an embarrassment of riches all around us.  For the first time, I actually found having Jumbotrons useful in the big outdoors. But maybe because I performed as a dancer so many times, walking by musicians pouring heart and soul out on stage wasn't easy for me.  Choices were made and I'm still contemplating whether they were even the right ones. The schedule was simply jam packed with favorite bands, which was also why we were so game to finally travel to Austin. At the top of my list are the shows where I caught the entire set, as I found it far more satisfying, but these were also incredible performances. Phoenix, The National, Vampire Weekend, Toro Y Moi, Arctic Monkeys and Divine Fits included could have easily been on the list if I was able to see more of them. Of course this is no big reveal to my indie leanings, as there were so many other types of artists at the festival.

Here's my picks:
1) Franz Ferdinand (my longing to see them helps but what a great show, start to finish)
2) Okkervill River (somewhat of a discovery for me, so thrilled to dig into something new)
3) Atoms for Peace (huge fan of Thom Yorke's solo work as well as Radiohead, love his voice too plus this group was absolutely incredible live -- you could feel the earth shake with the bass)
4) The Cure (such a pleasant surprise to find these 80s hits standing the test of time)

Austin is an amazing place full of people who really treasure live music -- what a wonderful thing. They came to listen and chat with each other whether local or not, it just did not matter as everyone was so friendly and outgoing. (Without provocation I actually heard that line about how Austin is not part of the rest of Texas, even though it's the state capital!) Below are a few more videos from the archives and the second weekend features some live feeds, check the schedule here. I know I'll be happy to tune in again.