Austin knows what it's getting into with this music festival associated with the long-running TV show Austin City Limits - from the Disney like lines for free shuttle buses, to providing racks for thousands of bikes at Zilker Park and special lanes for taxis and those buses to get the thousands of people to and fro downtown.  Everything sounded great if you positioned yourself in front of each stage, which is of course the most important thing and reason number one people were even there - whether as a dedicated fan smack in front of the stage or further back relaxing on a blanket or camping chair. It was good to get there somewhat early on the afternoon of day one, before the throngs arrived by night fall.  We were able to get the lay of the land and enjoy a full set or two before riding that merry-so-round of musical fare at festivals.


Smith Westerns had started their set and were moving confidently through their songs.  This young band from Chicago just released a sophomore album, Soft Will, a solid follow up to their critically acclaimed debut a few years ago.  Next, we wandered over to check out a few power pop hits with the huge audience by Fun. before checking out Okkervil River. This band with Austin roots that has a new concept album about frontman's Will Sheff's childhood in rural New Hampshire.  I had heard a few songs from this seventh album,  The Silver Gynasium, along with an NPR interview with Sheff which piqued my interest.  The newer material is less sleepy and esoteric, so translated live it turned into one potent performance.


From there on we hopped from stage to stage.  There was a huge audience in place for Vampire Weekend's set which opened with "Cousins" and a few older hits before launching into the new album, Modern Vampires of the City.  The band rocked out with "Diane Young" and  "Unbelievers" as veteran road warriors that they are now, taking their fans right along for the ride.  One stage over, the Chicago-based brother/sister team of Wild Belle (Natalie and Elliot Bergman) presented a breezy cocktail hour set. They transformed their Texas stage with a islands vacation vibe, wearing their white suits and presenting a mix of reggae inspired tunes. 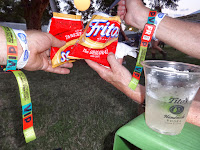 And it was great to see Arctic Monkeys are embracing rock again, after an album of vintage crooning. Though still dressed in classic style with hair slicked back, their songs from the new album, AM, blasted with the best of their hits.  As we found a place to sit and enjoy some local fare (that would be our first ever "Frito Pie" and Tito's), we could still hear the band rocking it from a far.  It was like being back on our front porch at home, only with a famous band playing one of my favorite songs in the background.  After dark we stopped by the neo-synth sounds of Canadian band Purity Ring and 80s pioneers Depeche Mode, see video highlights below.