We arrived for Day Three of ACL, I could hear the powerhouse vocals of Lizzy Plapinger of New York band MS MR. Heading towards that stage, the group began the teasing percussive intro of LCD Soundsystem's "Dance Yrself Clean"  (major bonus points in my book!) They made the song their own by adding pauses and backing off the chorus -- it was a thrill to hear this fave song covered in the wide open space of Zilker Park.  With the heat already baking the field, Plapinger told the crowd to have a "face melting good time" for the rest of the day before ending the set with their first single, "Hurricane." 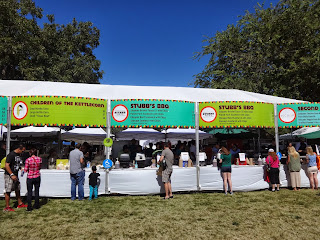 Grabbing some Stubbs BBQ, we sat under a tent across from Twin Forks doing a cover of "There She Was," by another fave band the Talking Heads.  (Maybe it was covers day - more bonus points!)  This alt/folk outfit has a similar sound to The Lumineers, as led by Dashboard Confessional vocalist Chris Carrabba.  We did two flybys by just walking place to place -- the country rock of Nashville based Wild Feathers and then Paper Diamond, an electronic music producer from Colorado known as Alex B.

Getting to the Franz Ferdinand stage early for a decent spot, it felt so good to be a devoted fan again.  There's just something about seeing a band for the beginning, middle and end of their performance.  I found that the festival mantra of catching bits and pieces of a set adds up to a very difference experience musically.  Since I've loved this Scottish indie rock quartet through all four albums, I didn't want to miss a thing.

Singer Alex Kapronos sauntered on stage to huge cheers in a bright red shirt and black jeans. He picked up the mike and said merrily, "Hullo Austin!"  They launched into "No You Girls,"a the tale of romance from a male's point of view, which created instant audience participation especially with the guys in the audience.  Next up was the single, "Right Thoughts," off the new album Right Thoughts Right Words Right Action. It showed the band back in their finest form, with an infectious mix of blistering fast guitars over a dance beat with lyrics that have repeated lines or simply vowels for singing along to Kapronos' commanding vocals.  New songs such as "Evil Eye" and "Bullet" fit right into older song "Do You Want To," "This Fire," and their breakout hit, "Take Me Out." 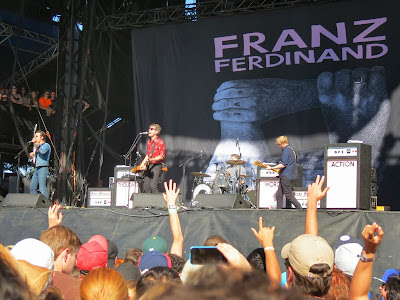 Kapranos was quite the showman, with his Bowie-esque lunges, kicking and gesturing to the audience.  When he put down the guitar, he caressed the mike and allowed himself to be quite the crooner.  But this is a band, as guitarist/background vocalist Nick McCarthy and bass player Robert Hardy joined him at the edge of the stage and everyone took turns visiting with Paul Thomson at the drum riser. To illustrate the connection to dance music, the group broke into a cover of Donna Summer's "I Feel Love" (another cover!)  The set ended with a blazing version of "Let's Get High." 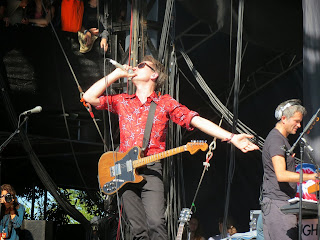 It took a while for the large crowd to disperse as we kept will the flow like cattle.  It took us past another large gathering in front of the stage with a fave chillwave musician Toro Y Moi.  I would have loved to linger but wanted to catch some of the Divine Fits way across the venue.  The band was on their last song, the smoldering "Shivers," but it was still worth it to bask a bit in local guy and Spoon frontman Britt Daniels' rock aura.
Within a minute Brooklyn based band The National took to the stage next door.  These indie road warriors seem to be everywhere lately, rolling out new songs from their album Trouble Will Find Me.  They began with the opening track, the plaintive "I Should Live In Salt" before the more moderate tempo of "Don't Swallow the Cap." Many in the crowd knew the words already and were even happier to add audience participation when their hit "Bloodbuzz Ohio" was rolled out.  Older songs "Alligator" and "England" were added in the set, which continued in the  backgound I went to check out a few songs by Phosphorescent.  Although I saw this band back in April, Alabama native Matthew Houck was under the weather so I thought take another listen.  His voice is raw and emotional anyway, finding a way under my skin whether in studio produced song or any concert performance.
Afterwards it was a quick run over to Australian psych rockers Tame Impala in time to hear my favorite songs back to back, "Elephant," and "Apocalypse Dreams." When not busy with his guitar, singer/songwriter Kevin Parker took to holding a stuffed tiger aloft to the delight of the rabid fans up front. Then I took another dash to the Phoenix stage to see the French band enter the stage to begin "Entertainment," their single off their latest album, Bankrupt! Even far from the stage, I could hear singer Thomas Mar count off their hit "Lisztomania" in French, "Un, deux, un deux trois!"
A few songs later it was time to grab a good spot for the Atoms for Peace show.  Radiohead frontman Thom Yorke did not disappoint, rolling out the multi-layered compositions with collaborators bassist Flea from the Red Hot Chillipeppers and Nigel Godrich, long time producer for Radiohead. Yorke came to the mike center stage to begin the show with a greeting, "Hey, we're called Atoms for Peace. Pleased to make you acquaintance." With his ethereal voice, facial whiskers and stubby pony tail, he really appeared to be of another world. Plus, he really does dance like the videos!  For the encore, Yorke asked the tremendous crowd in the dark, "Guess what?" "What?" Everyone replied in unison. He said how they had two more songs, "If you want them." Yorke said with an impish smile. The audience roared with conviction as the set continued into the night, well worth it to the very end. Enjoy video highlights of the day at the end of this post.