Videos for Moby's "The Perfect Life" (Album Due September 30) 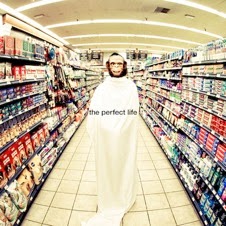 Yesterday Moby released another new song called "The Perfect Life" from his upcoming album, The Innocents, (due September 30 via Mute Records). This collaboration with wacky Wayne Coyne of The Flaming Lips is being called an "epic electronic soul track" by the label.

The track begins as a sing along with an uplifting chorus, Flaming Lips style, yielding to a soaring melody by a songstress that acts as a typical Moby stamp of approval. The musicians share the verses, then continue on together in through the choruses. "The Perfect Life" video was shot in L.A. with these two dressed as Mariachis. Moby posted a casting call on his Facebook with some very specific requests: S&M gimp rhythmic gymnast, eight roller-skating ghosts, 12 goth choir members, a punk rock brass band, and a drunk king (guy with beard age 35-50).  I love the scenes of this funny pair just making their way through the streets of the city in full, yet somehow adorable, costume. According to my brother out on the West Coast the filming took place in downtown L.A. on Broadway between 6th and 8th where there are many old theaters -- The Palace gets a nice cameo. Check it out below, along with an impromptu teaser which finds Coyne in frontman mode egging people on to sing just like he does so well in concerts with The Flaming Lips.

Moby explains, "A few weeks ago Wayne and I spent the day making a video for 'The Perfect Life'.  Then at the end of the day we broke out an acoustic guitar and gathered all of the extras on a rooftop overlooking L.A and sang an unrehearsed, impromptu version of the song.  Please keep in mind we had no idea what we were doing." The pair met in 1995 when they were both openers for the Red Hot Chili Peppers' European tour.  Moby says, "I thought of Wayne for this song because The Flaming Lips have evolved in this very open, celebratory band when they play live,and that was the perfect vibe for what I was imagining for ‘The Perfect Life.’ I texted Wayne and said, ‘Hey, I have a song – want to sing on it?’ Thirty seconds later, he texted me back: ‘Yes, send it to me, it will be great.” Indeed!