The Talking Heads' concert documentary Stop Making Sense is finally out in a digital format via Palm Pictures, just in time to celebrate its 30th anniversary.  As directed by Jonathan Demme (Silence of the Lambs, Philadelphia and The Master Builder, an adaption of the Ibsen play which is currently playing at NYC's Film Forum) the groundbreaking cinematography focused on the band, allowing the movie-going audience to become one with the live show crowd.  Find Stop Making Sense on iTunes here plus if you're lucky during a limited theatrical engagement. (NYC's Film Society of Lincoln Center is even hosting a Q&A with frontman David Byrne this Friday, August 1 at 9 pm with a showing.)

The original footage was collected over three nights at the Pantages Theater in Hollywood back in 1983, using long camera shots and stripped down lighting to create a virtual reality -- a "you are there" feeling that only gets even better as the camera pulls in tightly,  placing the viewer right on stage with this iconic 80s band.  I was at the Forest Hills tour stop, up to the side in bleachers usually reserved for watching tennis.  It was such a thrill to see Byrne walk out solo with his acoustic guitar to play "Psycho Killer" along with a little cassette recorder. It was a quirky yet appropriate beginning to the show, as he stumbled around the stage in precise choreography that would continue throughout the night. (See the first video below to relive this moment.) Then song by song, Byrne is joined by the rest of the group: Tina Weymouth on bass, Chris Franz on drums, and Jerry Harrison. The core group just kills it as they joined together for "Found a Job" in the second below, showing their strength as a quartet with a much bigger sound that transcended genres and now time.

At the time, I owned all the Talking Heads records including the latest, Speaking in Tongues, which would bring the band its first and only American Top Ten hit, "Burning Down the House." My favorite song would be the album's sweet last track, "This Must Be the Place (Naive Melody)" and just love how Byrne created a homey look with a floor lamp that he proceeds to dance with just like Fred Astaire.  Check out the backdrop of books and random images in the third video below. (There were plenty of random words elsewhere in the show as well, both radical use of stream of consciousness associations that seem quite ordinary today.) It showcases the talents of Bernie Worrell (of Parliament-Funkadelic) on keyboards, Alex Weir on guitar and back up singers Lynn Mabry and Edna Holt, along with additional percussion provided by Steve Scales.

Yet it was the song "Girlfriend Is Better" that gave the film its title, with the lyrics "Stop making sense!" Paul and I, just newlyweds, were out at Greenwich Village hot spot Da Silvano after the movie release, when someone upstairs lowered a note to Byrne's sidewalk table. It read "Stop making sense." It was my first of many NYC encounters with this musical genius, fangirl that I am and always will be!

I also went to the movie premiere party at The Ritz on 11th Street (now Webster Hall), where the band came out on stage to introduce the movie before it played on the big screen hung from the ceiling, mostly used for music videos to keep the crowds dancing.  It was one big party that night, and afterwards I walked back to our first apartment with a coveted poster that still hangs in our home -- as well as in the Rock and Roll Hall of Fame. And while I don't still have my concert t-shirt, at least I have a photo of me wearing it (featuring the artwork of Speaking in Tongues, see album cover at end of the post).  This is a snapshot archiving my look at the time as it's paired with a black cotton mini-skirt, low-heeled pumps and back-combed 80s bangs. Clearly some things, like Talking Heads music, are better equipped to stand the test of time. 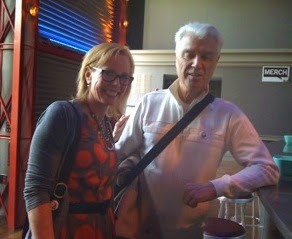 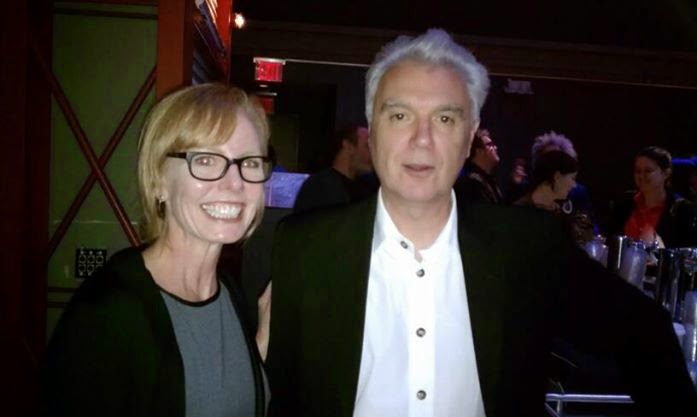 Band of Horses creates the kind of music that makes you stop, listen and feel.  The group is unafraid of grand gestures and deep emotions, with an indie rock base that crosses into Southern rock. Lyrics delivered in a distinctive twang deal with screen doors swayin', fixin' drinks in the morning and incredibly romantic yearnings, such as "my thoughts drift to you." Chorus lines repeat to emphasize meaning while building fervor, never as a repetitive exercise. Over four albums since 2004, their sound swings from sweet lullabies to soaring crescendos of melody and stomping rockers with blasts of guitar -- all benefiting from the immediacy of live performance.

The core quintet since 2010 is now based in Charleston, South Carolina and treated fans to a 20-song set at The Capitol Theatre, all wearing jeans and beards on recent summer's night: singer/songwriter Ben Bridell (guitar), Tyler Ramsey (guitar), Bill Reynolds (bass), Creighton Barrett (percussion) and Ryan Monroe (keyboards/mandolin). This evening began with Midlake downsized to an acoustic trio, which unfortunately drained the songs from any anthemic punch. Band of Horses then led off with the lilting "Way Back Home," moving into the sweeping orchestral gestures of "Factory," both from Infinite Arms (2010).  Another hit for the band, "Ode to LRC" from Cease to Begin (2007) was offered up early, a song with the audacity to break into a "la-di-da" ending after declaring "The world is such a wonderful place" over and over (as captured in the video below). "No One's Gonna Love You" brought another highlight with heartfelt lyrics how "No one's gonna love you more than I do" (my soundtrack choice if I should ever feel a need to renew my wedding vows).

Brindell earnestly responded to the appreciative crowd with lots of "thanks y'all," allowing the music to do the requisite soul bearing. Even bandmates Ramsey and Reynolds knew to step back occasionally and keep things still to let the passionate vocals ring out through the venue. Check out the set list along with some photos and videos, plus at the very end of the post is an awesome poster printed especially for the night by a friend of the band (that I got signed by all five members of the band after the show!) 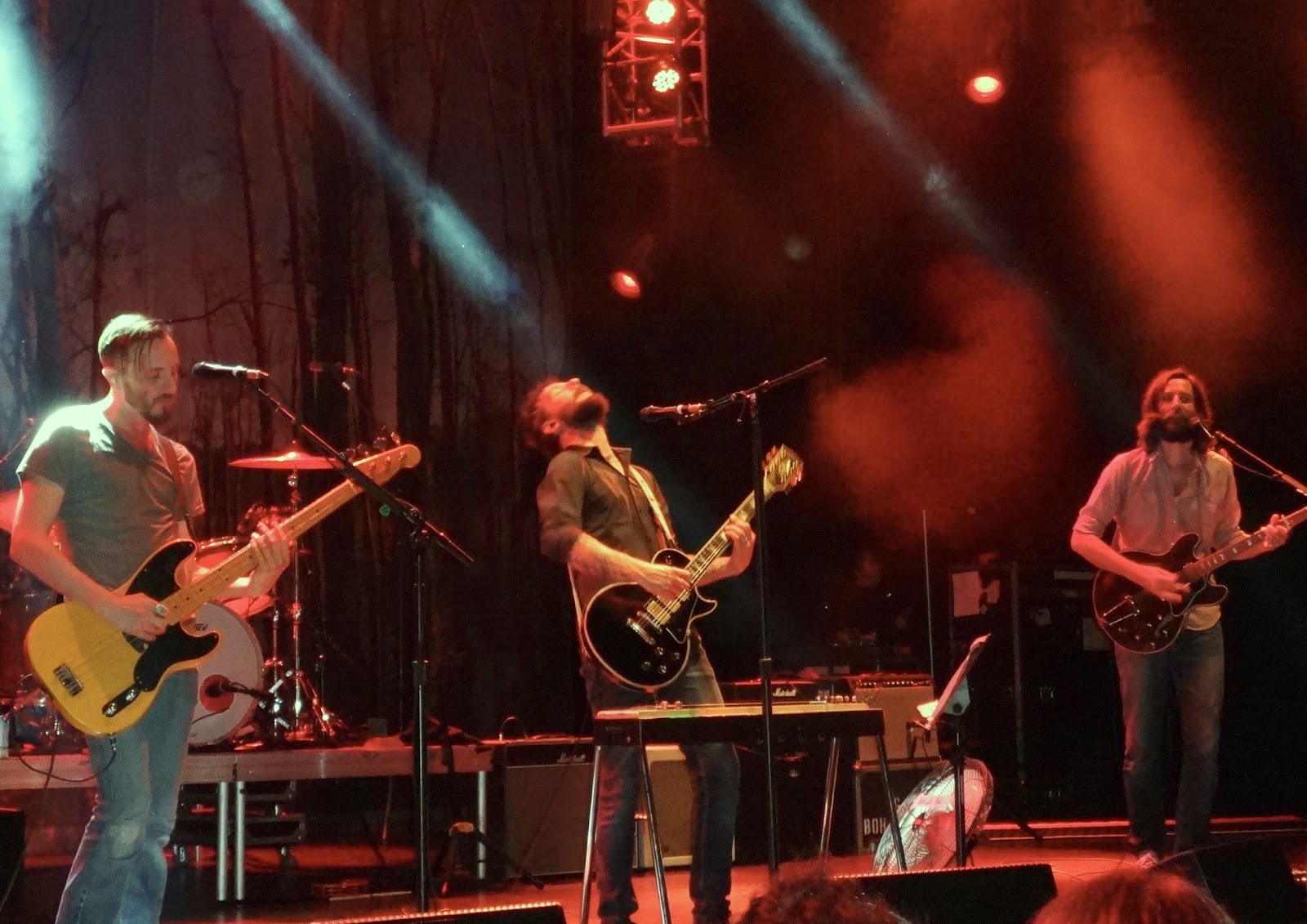 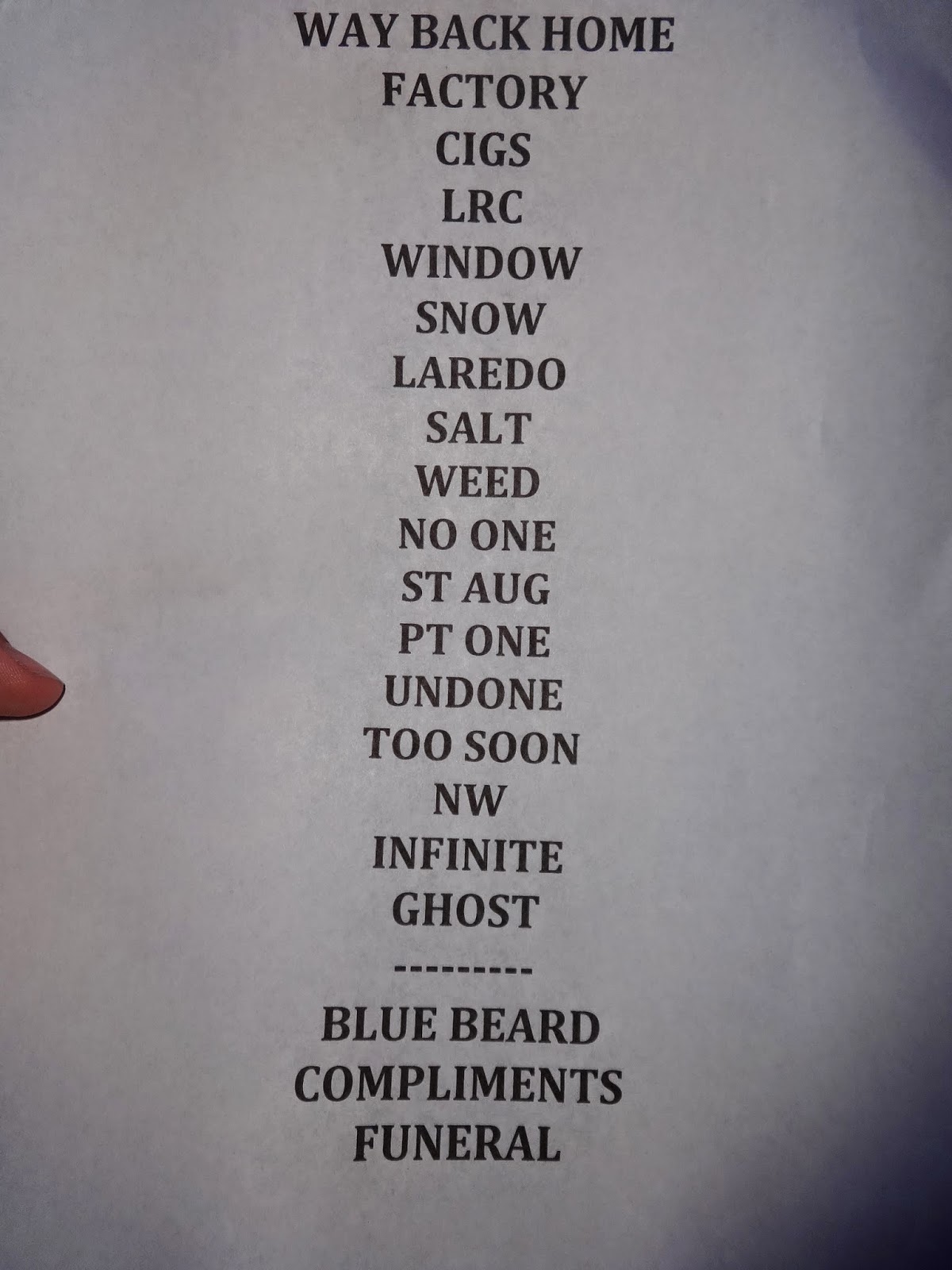 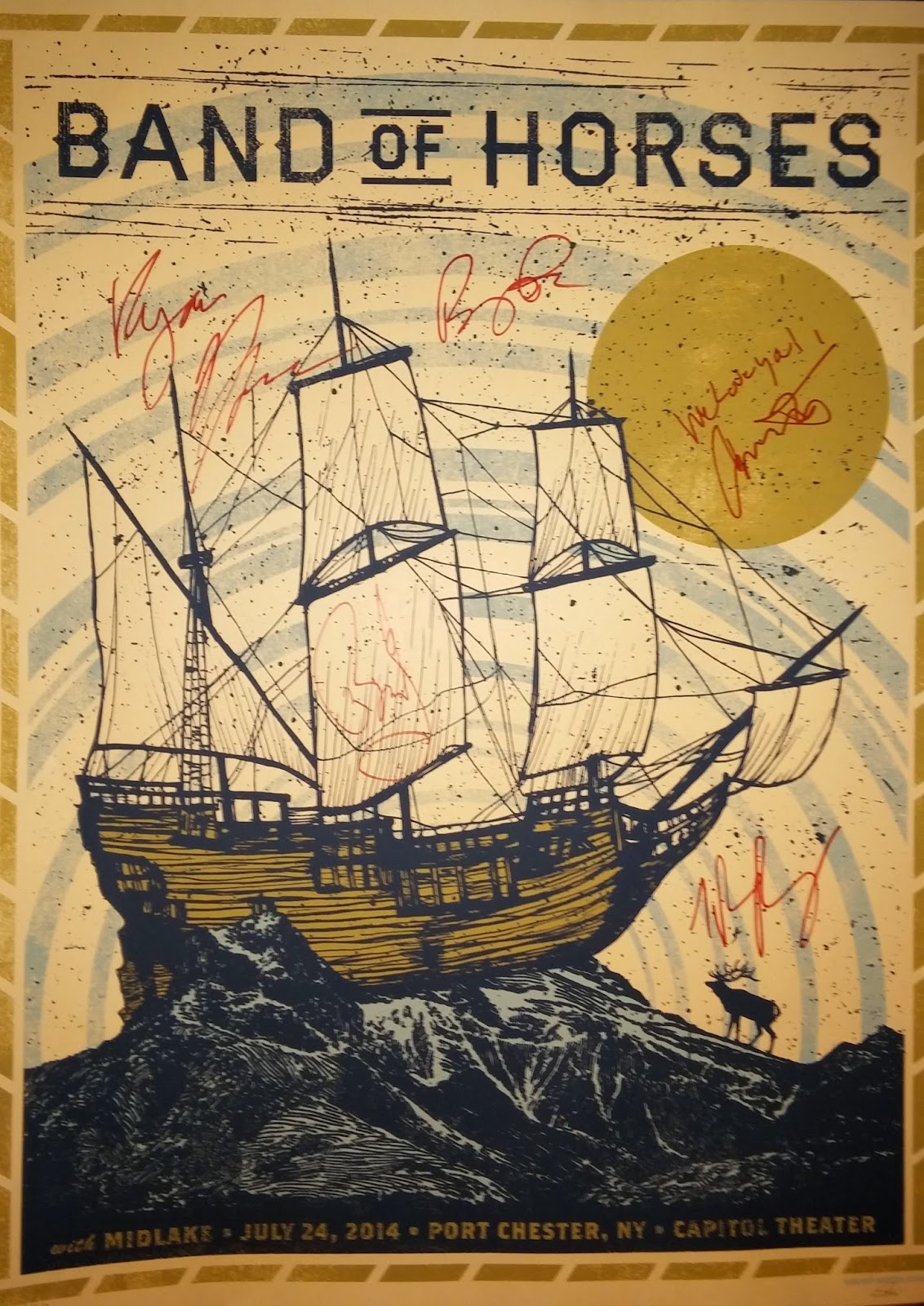 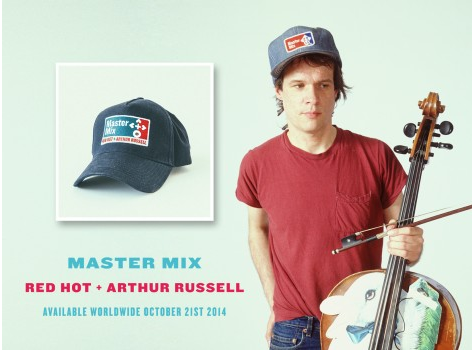 The Red Hot Organization has released over fifteen compilation albums since 1989, as part of its dedication to fighting AIDS through pop culture. I was able to thank founder John Carlin firsthand during an interview for this ingenious method of supporting a worthy mission, one that continues to haunt those of us who watched friends with the disease given a death sentence during the 80s and 90s. The latest album will pay tribute to Arthur Russell, part of the music scene in NYC's East Village during that time until his untimely death at age 40 in 1992 from AIDS-related causes. He was a talented cellist, pianist, and singer, who easily shifted from classical to folk and disco when composing.

Red Hot + Arthur Russell (due October 21 via Yep Roc) features 26 tracks by more than 20 artists. It includes many faves from my New Music Playlists: Hot Chip, Sufjan Stevens, Phosphorescent, Junip's José González, Devendra Banhart, Arcade Fire's Richard Reed Parry and Neon Indian's Alan Palomo (as VEGA INTL). Hot Chip is a perfect fit for one of Russell's dance tunes, as witnessed in a preview video showing some behind the scenes recording of "Go Bang."  Check it out along with the track list below, and add this album to your list for fall listening.

Upcoming Releases - Listen to Caribou New Song "Can't Do Without You"

All of a sudden there's a bunch of upcoming releases; I'm counting the days until their drop dates (see list below). One of them is from Dan Snaith, the Canadian mastermind behind the electronica band Caribou (as well as Manitoba and Daphni). His gyrating, funky tune "Odessa" caught my ear with heavy airplay on KCRW back in 2010, and landed a spot in my Late Fall 2010 Playlist plus a Top 20+ Songs of 2010. Based on this one song I was thrilled to catch Snaith live at Moogfest 2010, where he huddled as a quartet behind a drum kit in a corner of the arena stage. (Snaith plays drums, guitar, bass and synths but chooses percussion when performing concerts.) With openers, there's plenty of equipment announcing the next band behind the group and taking up space, but I loved how Snaith felt a need to be even more scrunched together with the rest of the musicians.  It also made the performance much more intense, as they fed off of each other's energy while the sound resonated in the cavernous space before a huge crowd.
The lead single "Can't Do With You" is filled with disjointed samples leading into a fluid groove that finds that "Odessa" bliss once again.  It is off the sixth studio album, Our Love, to be released October 7 via Merge Records.  Caribou will be appearing during the four-day music festival celebrating the Merge 25th Anniversary on July 26 in Carborro, NC before a full tour this fall, stopping at Webster Hall in NYC November 11.  (Merge also recently partnered with Google Play for a label doc and exclusive songs in honor of 25 years.) Check out the song here and other releases -- I've marked my calendar already! 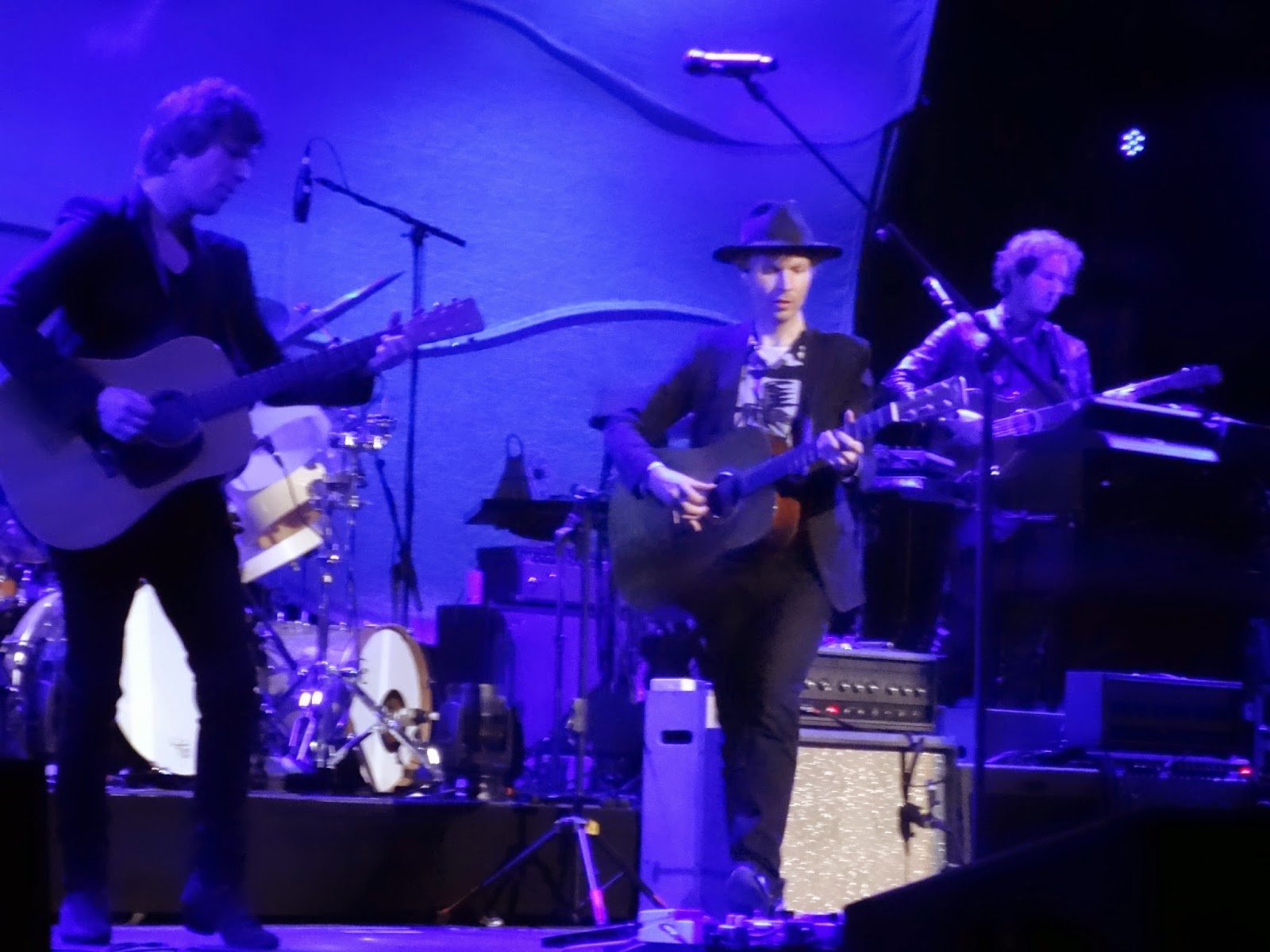 Fans filled the gracious space of NYC's Hammerstein Ballroom June 30th for Beck's first Manhattan show since 2008, where they were treated to the artist cranking out new songs and old hits with the same musical intensity.  Just a year ago, Beck appeared content presenting an acoustic folky vibe and I thought I might never see some of my favorite songs ever in a concert setting. For decades he has composed whatever interested him at the time, without any preconceived notions not to mix and match genres. But there he was on stage, leading his band through a deep catalogue of alt music hits. Beck chose to begin with the sweet tune "Golden Age" from  Sea Change (2002). This, along with "Lost Cause" from the same collection, mixed in well with the songs off the new release, Morning Phase, as Beck has described these are companion albums in concept.

He explained that since it had been so long since a "proper concert" in Manhattan, they needed take extra time to "catch up." Beck disclosed how things would start off a bit slow before getting rowdy, and he was right.  After the shimmering acoustics of "Wave," "Waking Light" and "Blue Moon" the stage lit up with the churning intro for "Devil's Haircut" (the video for this song off 1996's Odelay shows Beck walking around NYC carrying a boombox).  Standing on the side in front of a speaker, I could feel the sound waves pulse in time. Beck has always had a knack for pulling off crazy movement while performing in an endearing and slightly geeky way -- he obviously enjoys pulling off these complicated songs with a fresh intensity. The dance party continued as more classic Beck tunes followed: "Black Tambourine,""New Pollution" and "Think I'm in Love" (where he broke into Donna Summer's "I'm in Love" just like Franz Ferdinand did at last fall's ACL Music Festival!)  He brilliantly broke out "Loser" mid set, saving "Where It's At" for an epic closer.  Sean Lennon even joined in on tambourine after serving as a solid warm up presence with his psych rock band, The Ghost of a Saber Tooth Tiger. Check out the full set list below, along with some videos from the night. 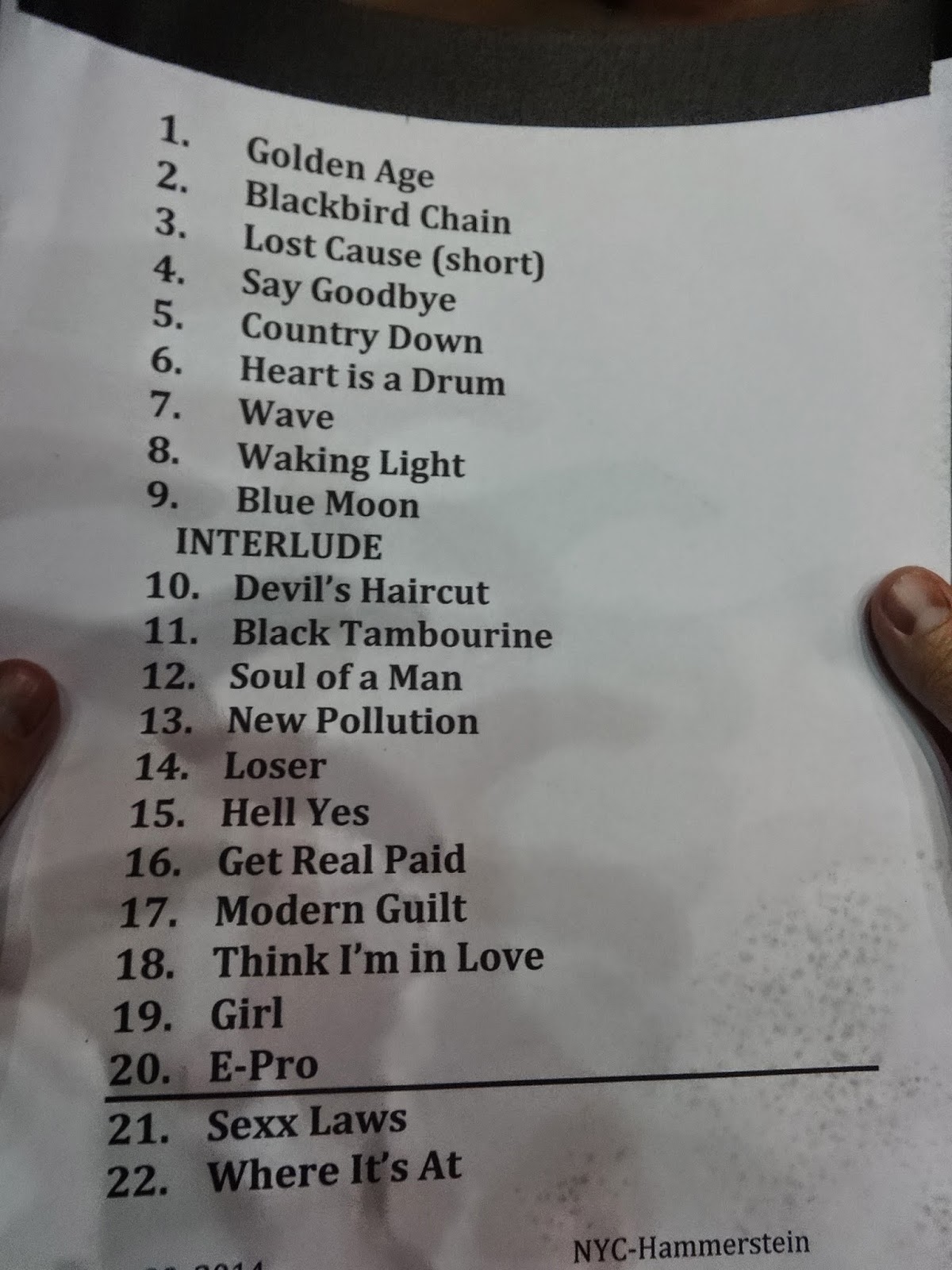