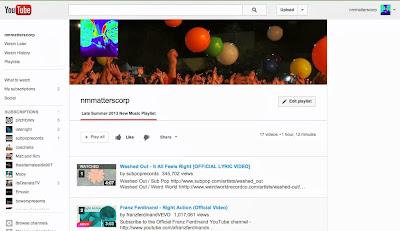 This time around I quickly found all of the songs from my Late Summer 2013 Playlist on YouTube as official videos, whether with a static image or moving visuals.  It attests to the new notion of putting music on YouTube as a promotional tool, no matter if there's fancy filming along with it or not.

I offer it as a companion piece to the Grooveshark audio, and yet another opportunity to explore new music. Link to the NMMatterscorp YouTube page or click the video below. 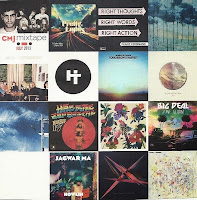 As if on cue, new releases heated up the summer fun with lush soundtracks courtesy of Washed out, Boards of Canada and Jon Hopkins, plus pop gems from Camera Obscura, Maps and Big Deal.  A retro-tinged Har Mar Superstar, dedicated alt-rockers Primal Scream and indietronica from The Octopus Project round out the latest playlist, while new bands Bear Mountain, Jaqwar Ma and Brazos provide a fine update to any music collection.  Advance singles from Beck and Franz Ferdinand also bring an optimistic outlook for the rest of the year, so dig in.  Link to listen here.

**EXTRA CREDIT IF YOU CAN NAME EVERY BAND WITH A TIE TO SCOTLAND (ANSWER AT THE END OF THE POST!)

1. “It All Feels Right” – Washed Out
Georgian chillwave musician Ernest Greene is back with a second full-length album, Paracosm, which incorporates over fifty instruments to move beyond sampling.  This single is the first track Greene worked on for the collection and his favorite as it captures the original vision of “daytime” sounding songs.

3. “Diamonds” – The Boxer Rebellion
Tennessee native Nathan Nicholson’s heartfelt vocals are a signature part of this indie rock quartet formed in London back in 2001.  “Diamonds” allows an expansive approach to the guitar-driven compositions on the band’s fourth album, Promises.

5. “How the Ranks Was Won” – Brazos
Martin Crane relocated from Austin, Texas, to Brooklyn for an indie band mentality in his second album, Saltwater.  This beguiling tune tells the tale of a ghost ship with both a bemused detachment and emphasis on melody.

6. “Sharpteeth” – The Octopus Project
This Austin quartet is adding vocals into its experimental mix of indietronica for a welcome human element that slyly enters above the creative fray.  This is the second single from Fever Forms, the band’s fifth album since 1999.

8. “Come Save Me” – Jagwar Ma
This catchy tune by Australian duo Gabriel Winterfield and Jono Ma is a highlight of the band’s debut album, Howlin.  The solid band sound rocks along with interweaving synths until a slow fade out leaves the listener wanting more.

9. “Yellow Bird” – Pretty Lights
Colorado-based electronic musician Derek Vincent has released the first album of originally produced compositions, A Color Map of the Sun.  “Yellow  Bird” luxuriates in a simple loop of dreamy beats until a female vocal line drifts in above it all.

10. “In Your Car” – Big Deal
London duo Big Deal features Kacey Underwood and Alice Costelloe, with songwriting and vocals shared in tandem.  For the sophomore album, June Gloom, they expand to a full band sound with appealing pop grandeur.

11. “A.M.A.” – Maps
U.K. musician James Chapman has released his third album as Maps, Vicissitude. This song is the first in the collection, with a drum track intro leading the way for synthesizers as mixed by Ken Thomas (M83, Sigur Rós).

13. “Lady, You Shot Me” – Har Mar Superstar
Har Mar Superstar is the stage name of Sean Matthew Tillman, a singer/songwriter from Minnesota.  He has penned tunes for Jennifer Lopez and Kelly Osbourne but shops his own wares in a retro-style for a fifth album, Bye Bye 17.

15. “Defriended” – Beck
“Defriended” is a stand alone single announcing Beck’s return to a electronic playground, with the intentions of releasing two albums of new material after 2008’s Modern Guilt.  The tune wavers through a synth-laden landscape with Beck’s familiar plaintive vocals.

Oh Franz Ferdinand, how I've missed you! Ever since the 2002 hit "Take Me Out" hit the airwaves, this Scottish indie rock band has ranked high on my list.  Their new album, Right Thoughts, Right Words, Right Action now streaming in advance of the release date on KCRW, marks a welcome return to those first songs of high energy fun.  Their behind the scenes video, posted here back in June, shows that the group's bond seems as tight as ever.

The band camaraderie was also evident when the group appeared for a live session on "Morning Becomes Eclectic" back on July 30.  They tore through the new songs and revisited "The Dark of the Matinée" from that first self-titled album.  At times the quartet sounded scrappy, but at least it was clear they all have a healthy pulse. Besides, it's easy to forget that these gigs at the Los Angeles radio station are recorded before noon, even as I was thrilled to be able to listen in and watch it all live as it was happening from the East Coast. Links for both opportunities to hear the new Franz Ferdinand songs are listed below.

Listen to the "Album Preview" (before the release date of August 27 via Domino Records) here.

Listen (or even better watch) their session in the KCRW studio here.

I've been smitten with the band called The Octopus Project ever since I heard their song "Truck" years ago.  The tune bursts at the seams with joyous layers of electronic and basic band instrumentation without requiringany sort of vocal anchor, it simply charges through your senses until everything ends somehow after just two minutes.

The intensity of this indietronica requires all four members to fully commit to whatever instrument they happen to be in front of, as they change places often. Then there's lovely Yvonne Lambert's expertise with the Theremin, utilizing a dancer's poise from center stage.  Rounding out the line up is her husband Josh Lambert, Toto Miranda and Ryan Figg. (I was able to interview the quartet from Austin, Texas back at Moogfest 2010 where I talked about all this and more.)

Their latest album, Fever Forms, introduces vocals to expand the sound and hopefully bring more recognition from the music scene.  During the set at Mercury Lounge Saturday night, this new development seemed to throw off the sound guy when they played the two singles, "Whitby" and "Sharpteeth," back to back.  By the second song, the vocals were less buried in the mix although Miranda and Yvonne Lambert still looked tentative about their new role as singers.  The show's lighting was tough for shooting mementos but the place was packed, making for quite a show.  Here's the set list and a video for the first song (and that was just the beginning!)  The tour continues west all the way to California before heading across the pond to the U.K. and Europe. Official PopMatters write up at link here. 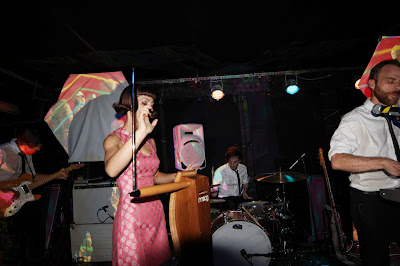 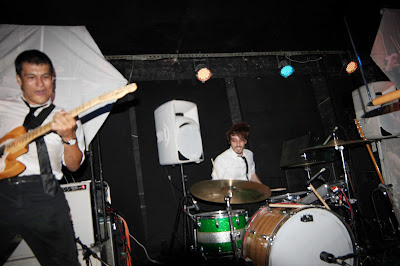 Posted by JaneJS at 3:12 PM
Email ThisBlogThis!Share to TwitterShare to FacebookShare to Pinterest
Labels: Peek-A-Boo Records, The Octopus Project 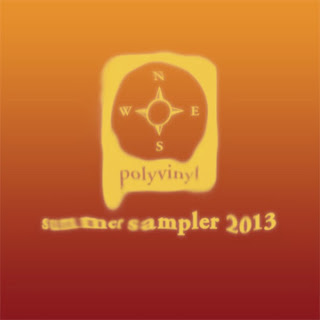 The Polyvinyl Record Co. is gifting twelve tracks in honor of hazy summer days. Their Summer Sampler 2013 starts off with two fave bands, of Montreal's twangy tune "Fugitive Air" and a new percussion-fest from The Dodos called "Confidence." From there I was more than happy to explore bands I don't know so well, such as the punky Their/They're/There and synth heavy psych rock of Pillar Point.  The unabashed pop in "Put a Light On" by Louisiana duo Generationals had me wanting more and I was impressed by the sultry space rock of another duo known as Wampire, from Portland.

STRFKR's song "Atlantis" opens with a smooth instrumental introduction that gives way to a gauzy pop haven. (Check out the band's video full of summer fun below the track list at the bottom of the post).  Ending it all is a somewhat goofy gender call and response in "Green Blood" by Sonny & The Sunsets. Hey why not, the season's not over yet!

Visit the Polyvinyl store at the link here to order up your free copy, along with many other tempting merch items.

Yo La Tengo has released a companion video to the animated wonderland that represented "Ohm," where a cigar smoking baby commandeers a vintage VW bug while a mathematical equation scrolled on a white board uses band names, musicians and lyrics to answer the question "Who is Yo La Tengo?" In the comments section there's a request for these storyboards, and the band has offered up their breezy song "Is That Enough" as background. The videos are directed by Donick Cary with Sugarshack Animation, utilizing an angular edginess that recalls some of my very favorite cartoons such as Clone High and Sheep in the Big City. (Stay tuned for a special cameo at the end!)

Both songs are off Yo La Tengo's latest album, Fade (Matador Records), which is lucky number thirteen for this group that formed in 1984.  Since 1992, the line up has remained the trio of Ira Kaplan, James McNew and Georgie Hubley. I chose the closing track, "Before We Run," for my Early Summer 2013 New Music Playlist. It's a mesmerizing tune sung by Hubley, and along with these two gems, I wouldn't be surprised if this album is on my Top Ten List for 2013.  Below the videos are a few tour dates in the U.S., before the band heads to Europe.


Ahead of MGMT’s third self-titled album (due September 17 through Columbia Records), the duo that is Andrew VanWyngarden and Ben Goldwasser has released a video for “Your Life Is a Lie.” .” It’s a trippy collage of visuals both mundane (birthday cake, boy choir and band flyer) and bizarre (singing skeletons and an early fax machine) full of colorful characters as directed by Tom Kuntz.  As the words of this solid psych rock song are spelled out on various surfaces, a playful accent beat is illustrated by kicking things, bouncing a playground ball and even eating a banana.

I caught the band during Moogfest 2010 when they were playing challenging compositions from their last album, Congratulations. This song reveals a lighter touch, although an earlier single "Alien Days" (link to listen here on PopMatters) veers towards the overly complicated. The band will play the Virgin Mobile Freefest September 21 in Columbia, Maryland at the Merriweather Post Pavilion before heading over for a fall tour in the U.K. and Europe. This is a free show with donations going towards homeless youth, tickets available August 9 -- more info here.