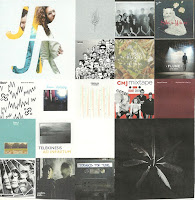 Why not rock another playlist while there are still weeks of summer left? There’s certainly enough new music on the scene to choose from. In researching my latest picks, I also discovered plenty of crazy descriptive phrases to label the bands, from electropop, indie pop and rock pop to atmospheric rock, post-rock and rocktronica. Check out whatever perks up those listening ears, be it veterans such as The Dears, Mates of State, Beirut, The Chemical Brothers and Wilco or newer groups such as Penguin Prison, FFS and Baio. Listen on Spotify via this link or as a YouTube playlist.

2. “Staring Contest” – Mates of State
“Staring Contest” is a typical blast of fun from the indie pop couple Kori Gardner (keyboards, vocals) and Jason Hammel (percussion, vocals), musical allies since 1999. The latest release is a self-produced EP, You’re Going to Make It.

3. “No No No” – Beirut
Santa Fe native Zach Condon returns with a new batch of songs following hospitalization for exhaustion after excessive touring for his last album in 2011. This sweet ditty is the title track for the upcoming release, with a familiar worldview embedded in the instrumentation.

5. “In a Future World” – Telekinesis
Drummer and songwriter Michael Benjamin Lerner took a different approach for Ad Infinitum, his third album since 2008 as Telekinesis. As a happy newlywed in Seattle, he took to the basement studio to compose songs dripping with electronica as evidenced in “In a Future World.”

6. “Island” – Surfer Blood
Surfer Blood is an alt rock quartet from West Palm Beach that just released its third album since 2009, 1000 Palms. Singer John Paul Pitts brings a laid back vibe to the vocals for the band, as demonstrated in “Island.”

8. “Some Minds (featuring Andrew Wyatt)” – Flume
Flume is the stage name of Sydney-based multi-instrumentalist and electronic music producer D.J. Harley Streten. Here he enlists Miike Snow’s Andrew Wyatt for lyrics and shadowy vocals in this stand-alone single, following a debut album back in 2012.

10. “Gone” – JR JR
Dale Earnhardt Jr. Jr. changed its name after five years to JR JR and recently released this feel-good single, “Gone,” in advance of a third album. The Detroit indie pop twosome of Daniel Zott and Josh Epstein is clearly ready to keep the party going, whatever the moniker.

11. “Call Girl” – FFS
The single “Call Girl” is a result of collaborative recording sessions between Scottish indie rock band Franz Ferdinand and the L.A. rock pop brothers pair, Sparks (Ron and Russell Mael). Songs on the self-titled album revel in heavy hooks and a collective swagger found in this supergroup.

14. “Sister of Pearl” –Baio
Chris Baio, known as the bass player for Vampire Weekend, is releasing a solo debut of his dance music as he also keeps busy as a D.J. and record producer. This tune “Sister of Pearl” is a fun introduction to the new debut, The Names.

15. “Wide Open (featuring Beck)” – The Chemical Brothers
British electronic dance music partners since 1991, Tom Rowlands and Ed Simons are back with an eighth album, Born in the Echoes. They entrust the vocals to Beck for “Wide Open,” just one of the many rock star appearances in the collection.

16. “Sparks” – Beach House
The song’s genesis is a vocal loop captured during a sound check before a Beach House concert. It serves as a bewitching introduction to the upcoming fifth album, Depression Cherry, by the Baltimore-based dream pop duo of Alex Scally and Victoria Legrand.

17. “All Yours” – Widowspeak
Molly Hamilton (guitarist and vocalist) and guitarist Robert Earl Thomas of Widowspeak recently traveled upstate from Brooklyn to record new songs in a barn. “All Yours” is a winsome title track for the upcoming release, the band’s fourth album since 2010.

18. “No Comprende” – Low
Low is an indie rock trio from Duluth, Minnesota, known for slow tempos and spare arrangements for great effect. “No Comprende” lucidly continues that mantra as featured on an upcoming eleventh album, Ones and Sixes.

Dave Sitek of Maximum Balloon has released a new song from an upcoming sophomore album, "Let It Grow," a sweet, melodic tune already getting airplay on my favorite online new music sources KEXP and KCRW.  There is no title or release date yet from Sitek's label, Federal Prism Records, so this will have to hold us for the moment.

Maximum Balloon is Sitek's side project away from being a producer and guitarist for TV on the Radio and straight up producing bands such as Beady Eye, Yeah Yeah Yeahs, and Foals. It is the first new material since a track from the self-titled debut landed on my Fall 2010 New Music Playlist ("Apartment Wrestling" featuring vocals by David Byrne). Sitek reenlists other collaborators on that album for "Let It Grow" -- Karen O of the Yeah Yeah Yeahs and TV on the Radio frontman Tunde Adebimpe. The mood is all soft lighting and hushed singing as Karen O. performs in the love-soaked lullaby mode of her recent album Crush Songs or "The Moon Song" for the movie Her.  Adebimpe matches her tone, letting lyrical lines float gently into place. Take a listen here or on the label's SoundCloud page. It won't be the last time you'll want to hear the song.