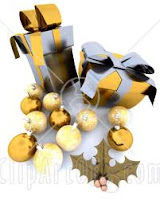 Here’s a list of 20 or so songs that individually made my ears happy this year. Most of them were culled from my top ten CDs but others exist on their own and I am grateful for the gift of such varied listening available this year. Again, in no particular order here you go… listen here! 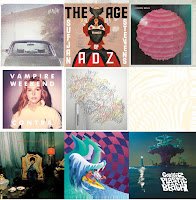 I am still avoiding reading about other ‘top ten’ lists -- got mine together so I can start seeing what other people think! Actually, this list was submitted to PopMatters for their year end compilation, where I was thrilled to have my vote count along with all the other music bloggers on the site. Some people still refer to collections of music created and published by bands/artists as albums or CDs but I’m trying to get used to referring to them as releases. That's what is really happening: a song is let loose online as an entity with others, or to pick and choose from as singles. In no particular order here are my favorites from 2010, a great year in music with these picks enjoyed many times over and lots of opportunities to see the bands in concert. When I did buy the physical CD, many times I was disappointed with the lack of lyrics and liner notes. (Why offer a booklet of artwork only?) But I'm ever grateful for the heavy toil of rehearsing and production hours, so I can't get that upset. The music is clearly what it’s all about.

1. The Suburbs/Arcade Fire
This third offering from the popular indie band was one of the strongest collections of the year. Some complain that musically things seem more calculated, but there’s still lots of originality throughout. Watching their show from Madison Square Garden live online was one of the unexpected highlights of my year – I just didn’t expect to enjoy the energy of band so much sitting in front of a computer screen. It’s also where I learned that Will Butler is just as important to the band as his frontman brother, Win Butler.

2.Congratulations/MGMT
Seeing this band was another highlight of my year even though their show at Moogfest in Asheville, North Carolina felt more like a rehearsal run through. It was somewhat lackluster beyond a standard lightshow. However, poring through this sophomore song cycle many times after it appeared last spring was a real treat. It's complicated at times and some of the over-the-top experimental tracks lost a few fans, but what's wrong reaching for something new?

3. Teen Beach/Beach House
Chill wave and dream pop became buzzphrases thanks to bands like Beach House. This duo from Baltimore prides itself on making music to make out to and from the first layered chord you can easily see where they get that label from. Lush soundscapes are the goal while moody effects create the foundation -- another musical genre is born. They warmed up for Vampire Weekend at Radio City this year and showcased the hall's excellent acoustics with a spare but mesmerizing stage show.

4. High Violet/The National
This fifth release from the Brooklyn band originally from Ohio is its most commercially successful by far. Solid songwriting has always been part of the plan but the brooding baritone of Matt Berninger picks it up a notch to allow some more melodic playfulness in some of the tunes. I learned how seriously he takes his frontman duties seeing him rev up the crowd at the Brooklyn Academy of Music last spring. Plus the opening line of Bloodbuzz Ohio has to be one of the sexiest lyrics ever.

5. This is Happening/LCD Soundsystem
Producer James Murphy has stated that this is the last release under the current band set up but I'm guessing there's plenty more in store for their fans. The wry lyrics, killer beats and layered tracks instantly create another fun dance party with every listen. I'm sure the party will continue with whomever he decides to invite along.

6. Transference/Spoon
Spoon's seventh release is self-produced, though it doesn't necessary show in every song. The band is still just as edgy with a solid, tightly knit group sound, but now and then things get a little self indulgent. This is not always a bad thing.

7. Contra/Vampire Weekend
Vampire Weekend came out with a strong sophomore release, with more of the same mash-up of genres and themes close to home – traveling privileged lives which took them to Mexico and beyond. During their tour they were also all business, recreating their carefully crafted tunes but since everything sounded great it was hard to complain.

8. Gorillaz/Plastic Beach
This was the most anticipated release in my book (or blog?). The five year wait was over with an extended track list boasting many stellar collaborations. Funky grooves, a children's choir and hard-to-pigeon hole sound remained true to their cause, and the fact this group no longer hides behind a scrim at gigs was a welcome change.

9. Sufjan Stevens/Age of Adz
That Sufjan Stevens would veer toward electronica was another pleasant surprise of the year. Folky leanings were given an futuristic update, with danceable tunes and cascades of complicated sound. His concert was also a highlight, with easy banter about songwriting, a dozen musicians on various instruments, and background dancers (who he even joined now and then!)

Danger Mouse teamed up with James Mercer of The Shins to create this band after meeting backstage years ago. The sensibility of a hip producer brought the laid back vibe of Mercer's vocals into a trendier place and it's full of musical ideas for all.
Posted by JaneJS at 8:14 PM
Email ThisBlogThis!Share to TwitterShare to FacebookShare to Pinterest
Labels: Arcade Fire, Beach House, Broken Bells, Gorillaz, LCD Soundsystem, MGMT, Spoon, Sufjan Stevens, The National, Vampire Weekend 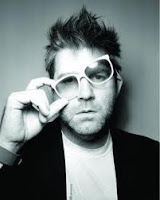 LCD Soundsystem stopped by the kcrw studio recently in the middle of their “last big tour forever” according to founder James Murphy. Everything sounds so fresh and accessible live, without the attention to minutia that exists in the studio of a music producer. Keyboards sound like they’re being played, not programmed, and lyrics are strung out or cut off with each breath. The band starts with the plaintive chords of “All I Want” and plowed through “I Can Change,” “Drunk Girls” and “Pow Pow” from the latest release, This Is Happening before an interview with Jason Bentley.

The easy conversation covers everything from growing up to Murphy’s early days in New York City, when indie rock felt like being plunked back in high school. There is discussion about scoring the movie Greenberg and how creating a film score is so different than crafting tunes. He describes why the songs from This Is Happening are “weirder” to play live and how a record is like a “communication device.” It’s a good reason to believe this certainly isn’t the last we’ve heard from the man, just songs under this moniker. The session ends with the party invitation of “All My Friends” off 2007’s Sound of Silver. 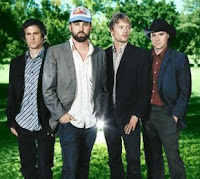 The Southern California alt rock band Cake took to the Irving Plaza stage in New York City on a frigid December date to heat up the night with two solid sets of tunes old and new. It was all part of the WRXP Yule Rock Holiday Concert Series, complete with a traditional tree lighting and the requisite dj introductions. Cake blasted into the signature drumbeat of “Comfort Eagle” with the crowd joining as one for the line “he is calling you DUDE!”


Cake’s lack of a set list allows a free form approach to their concerts, so they pulled out a few new songs throughout the evening sprinkled with hits. The newer tunes stood up well with the trademark mix of genres, satirical commentary and vibraslap. This sixth release is expected January 11 (with a lion on the cover, said frontman John McCrea). He also proclaimed that “We are Cake and we are here to serve you” as an introduction. “Love You Madly,” “Wheels” and “Friend is A Four Letter Word” provided the highlights. Other singalongs were suggested as endorphins for the brain that were easier to acquire than a beer from the bar in the back of the room.

As with all Cake shows, a tree was given away to someone who knew what kind of evergreen the little specimen decorating the stage (she just happened to be a cake decorator!) The conditions for the giveaway were that the receiver had a place to plant it, would put it there and document its growth on Cake’s website. This is coming from a group that has a carpool page for fans attending shows plus links to many environment and public policies relating to the cause. Cake then presented a blistering cover of Black Sabbath’s “War Pigs” for the encore and ended with the emblematic rock of “The Distance.”