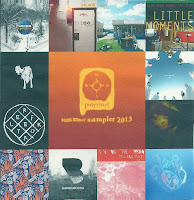 New music releases have been dropping like fall leaves, filling up another playlist ready for consumption. There are selections from albums by steadfast indie bands such as MGMT, Yuck and of Montreal plus iconic masters Sigur Rós and Moby. New bands HAERTS and Generationals impress with debuts while Gauntlet Hair unfortunately call it quits.  Plus check out teaser singles from Arcade Fire and TV on the Radio while waiting for full releases to appear in the coming months. Link to listen here, enjoy!

1. “FOH” – Superchunk
This veteran indie rock group was founded by Mac McCaughan and Laura Balance back in 1989, along with the beloved Merge Records in Chapel Hill, North Carolina, to provide a vehicle for their songs and music by friends.  They just released their tenth studio album ironically called I Hate Music, since this group clearly still loves the band lifestyle as detailed in this raucous tune.

2. “Your Life Is a Lie” – MGMT
This sardonic song is from the self-titled third album by American psych rock band MGMT, formed by Benjamin Goldwasser and Andrew VanWygarden during their college days at Wesleyan University in Middleton, Connecticut.

3. “Reflektor” – Arcade Fire
“Reflektor” is the title track of the upcoming fourth studio album by this indie rock band based in Montreal.  The intertwining vocals of husband and wife Win Butler and Régine Chassagne create swirling layers, until a cameo by music legend David Bowie.

4. “Rebirth” – Yuck
This U.K. indie rock band released its second album, Glow & Behold, with guitarist Max Bloom taking over vocal duties for this young band.  The dreamy “Rebirth” is the single for the new collection.

5. “Put a Light On” – Generationals
Generationals is an indie rock duo formed by New Orleans natives Ted Joyner and Grant Widmer, who have a fondness for vintage dance music recorded on analog 24-track equipment. The lush soundscape of “Put A Light One” is from their third album, Heza.

7. “Pagiaccio” – Barbarossa
London’s James Mathé croons over an old Casio keyboard, drum machines and analog synths for a sound inspired by 70s soul. (He is also a touring member of Junip.)  The pulsing “Pagiaccio” is from the artist’s third album, Bloodlines.

8. “Wings” – HAERTS
This indie synth pop quintet is based in Brooklyn, with roots over in Germany.  The powerhouse single, “Wings,” is the single off their debut EP, Hemiplegia.

11. “Fugitive Air” – of Montreal
of Montreal is an indie pop band from Athens, Georgia, was founded by frontman Kevin Barnes in 1996. With a wavering creative trajectory for each release, this lead track off the twelfth studio album, Lousy with Sylvanbriar, presents a country twang.

13. “Ísjaki” – Sigur Rós
Icelandic band Sigur Rós has released its seventh studio album since 1994, Kveiker.  The new songs are being described by the group as more aggressive, but the haunting falsetto of Jón Birgisson (a.k.a. Jónsi) adds a familiar sweetness.

14. “Million Miles” – TV On the Radio
This single from an upcoming album from Brooklyn indie rock band TV On the Radio, swells with emotion led by Tunde Adebimpe’s vocals. The sextet’s diverse influences, from soul to electronica, serve as only a starting point for the song.

15. “The Truth” – Dr. Dog
Dr. Dog just released its eighth studio album, B-Room, recorded in a newly built studio outside of Philadelphia. The band delivers their trademark fusion of 60s psych rock and lo-fi 90s in this lead off track for the collection.

16. “Bad Kingdom” – Moderat
Moderat is the electronic music project of a trio of artists based in Berlin: Sascha Ring (of Apparat), Gernot Bronsert and Sebastian Szary (of Modeselektor).  This pulsating single is from the group’s sophomore release, II.