It may have been a support slot but Voxhaul Broadcast took the stage at The Gramercy Theatre as a seasoned touring band ready for their breakthrough moment. Way before their full-length debut release Timing Is Everything appeared March 22, the L.A. based group was mentioned on the local taste-making radio station KCRW’s “Most Played” lists of 2010. They began with “Blackout” which is on heavy rotation there and being picked up elsewhere. It was played to tempo, not frantically sped up in the excitement of live performance, so things could rightly build as with shout outs adding to the party atmosphere.


Next up was “Leaving on the 5th,” another confident entry with their sound mixing rock, r&b and soul influences. Singer/Front man David Dennis doesn’t just take care of lead vocals -- he’s a storyteller using gestures to illustrate the lyrics, all while playing guitar. The catchy pop hooks have emotional payoffs and the musical structure of the songs aren’t rigid; they ebb and flow with dynamics. Dennis and guitarist Anthony Aguiar, along with bass player Philip Munsey, worked the edge of the stage to keep the audience part of the show. The muscular intensity of Kurt Allen on the drums propelled “Cheetah,” a big crowd pleaser. The set ended with the full on sound of “Back Rooms,” with an all hands on deck approach and screaming vocals. Voxhaul Broadcast will be back in New York City headlining shows May 5 (Webster Hall) and May 6 (Mercury Lounge). It’s clear they’re ready for the spotlight.
NMMatterscorp YouTube Video "Leaving on the 5th"
Posted by JaneJS at 8:32 PM
Email ThisBlogThis!Share to TwitterShare to FacebookShare to Pinterest
Labels: Voxhaul Broadcast 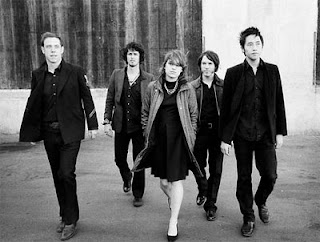 L.A. radio station KCRW is featuring the sophomore release from Airborne Toxic Event as part of their Album Preview series. It makes for an easy publicity stunt for this heavily favored local band in a burgeoning music scene. The band that hit the scene with their epic anthem, “Sometime Around Midnight” in 2008, about an impassioned plea to an ex-lover. The mix of indie rock and orchestral arrangements lends a grandeur to this quintet fronted by Mikel Jollett’s vocals. Their self-titled release will be supplemented by the new collection of songs due out April 26. All At Once begins with the rollicking drums of “All At Once” before “Numb” brings in sweet call back vocals by Anna Bulbrook. The third track is the single, “Changing” which is already receiving heavy airplay and rightly so. It has the makings of a hit from the opening handclaps to the sing along chorus. The arty video directed by Jan Danovic begins with “Sometime Around Midnight” on a car radio, then shows the band playing live with accompanying moves by L.A.-based dance crew, Strikers All-Stars, known for their community outreach (see below). The next acoustic entry, “All For A Woman,” gets bogged down by the simplistic lyrics: “Promising Everything to Everyone… You’re my favorite one.” But the band gets its groove back until another, more subtle acoustic ending with “The Graveyard Near The House.”

The Octopus Project @ The Music Hall of Williamsburg April 6th 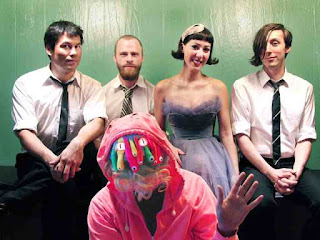 The Octopus Project swung through Brooklyn for a night at The Music Hall of Williamsburg April 6 as part of their national tour. This Austin group had to miss SXSW this year since they were on tour with Devo, having landed a supporting slot after playing together at last fall’s Moogfest. But their hometown showcased the band anyway with a win for #1 Best Experimental Band and last year’s release Hexadecagon was voted #8 in Album of the Year category in The 2010 – 2011 Austin Music Awards. Octopus Project’s live performance of Hexadecagon (which refers to a 16-sided object) with an 8-channel sound and an 8-channel video system was a highpoint of last year’s festival.


The band opened with “Malaria Codes” off their 2005 release One Ten Hundred Thousand Million. This minimalist composition was a nice warm up to their experimental indietronica, which never strays from an honest, sometimes humorous, human connection. The Octopus Project composes songs that have a beginning, middle and end: they don’t just push ‘play’ on a variety of electronic gizmos. The extraordinary musicianship is amplified by an exchange of roles on stage -- from switching spots at the drum kit to play guitar or pull out different instruments, even within the same song. A stage is a very busy place for Tito Miranda, Ryan Figg along with married couple Josh and Yvonne Lambert. However, beyond a few “thank yous” between songs, the band members kept to the business of adventurous music.

New Section: Next Up NYC 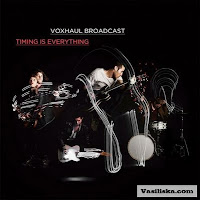 After more than a few comments about the amount of shows I've seen lately, I've started a new section on my blog called "Next Up NYC." It will highlight an upcoming show I'm planning to see and why -- Voxhaul Broadcast being the first to be listed. On Tuesday, April 19th they will play the tiny Gramercy Theatre with Rooney before touring with Airborne Toxic Event in May. This band decribes themselves as a mix of psychedelic/rock/soul with a raw, rockin' sound. Their song, "Blackout" is getting lots of airplay on kcrw.com's "Morning Becomes Eclectic" and I'm eager to experience it all live. My hero and former Musical Director of the show, Nick Harcourt, has declared the group one of LA's "Best New Indie Bands." The new release, Timing is Everything, was proclaimed as "New & Noteworthy" on itunes and can be heard in its entirety on bandcamp here.
Posted by JaneJS at 2:28 PM
Email ThisBlogThis!Share to TwitterShare to FacebookShare to Pinterest
Labels: KCRW, Voxhaul Broadcast
Newer Posts Older Posts Home
Subscribe to: Posts (Atom)