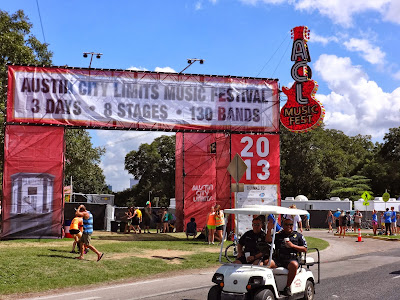 Back at ACL, Day Two started early with a noonish set by Dan Croll.  His song "From Nowhere" was one of my top twenty of 2012, so I made sure to get there in time.  Backing up this Liverpudian singer/songwriter was a full band at Croll's command added volume to his eager pop aesthetic. He asked "How we doing ACL?" And alluded to the day's heat by saying how since they were British, the band was "really, really, really hot." They played songs off the EP (also called From Nowhere) and along with some new songs, including a sweet nod to their home to end their time on stage with "England."
Afterwards, it was time to find shade and food.  Since Austin basically invented the food truck culture, the offerings at this festival are simply amazing.  From BBQ to tacos galore lined up in booths, there were some tough choices here too just like deciding what band to catch on the packed schedule.  There was also a market for shopping and even a mini-post office with picture post cards to send at the ready for $1, stamp included.

At the larger stage next door, a crowd was already in place for Portugal. The Man.  I caught this Portland band headlining Terminal 5 for CMJ Music Festival  back in 2011 after the sixth album, In the Mountain, In the Cloud, was on my heavy rotation.  The band has just released another album, Evil Friends, a strong collection continuing their quality alt-rock tinged with soul via John Gourley's vocals.  The set began full tilt with the heady new song "Purple, Yellow, Red and Blue" along with "Evil Friends," before heading into the past with an old-time fave "So American." Their epic arrangements with a stage full of musicians seemed better suited to the unlimited outdoor venue. The weather had cooled down and a breeze sent the festival flags in motion, the music had an added grandeur that wasn't quite allowed in the confines of an interior of any building.
A few flybys (Nashville's animated Wild Cub, Welch arty folk rock of Joy Formidable, indie rock from Ireland Little Green Cars) followed with a gem found on the stage with L.A. blues rock band Vintage Trouble -- frontman Ty Taylor was totally bringing it, as they say.  His energetic R&B swagger converted listeners into fans who sensed they found an up and coming star.
Heading over for Passion Pit, I could hear Canadian artist Grimes' high pitched vocals over a synth interplay in "Genesis" floating over the grounds.  Going stage to stage made for some long walks, but it's a treat letting the ears pick up whatever is playing at the time. In fact, most locals we met didn't even have a firm schedule of who they wanted to see but were there to hang out, meet people and hear good music.  Almost like attending the annual 4th of July fireworks display,  they seemed to be gathering simply in order experience some musical magic.

And with the strobe lights flying at the Passion Pit stage, there really were pyrotechnics.  Newly bearded Michael Angelakos led the Boston area band through catchy synth pop tunes such as "Carried Away," and "The Reeling." He said, "Last time Austin, it was pretty loud." But he implored the fans to take it even louder, which they instantly did so Angelakos added "Austin, how we love you!" During their hit "Talk A Walk" I did just that, heading over to catch a song by Chicago's band pride Wilco.  I plunked myself down in the grass and just happened to hear one of my faves, the lilting tune "Impossible Germany." It was a nice contrast to what was going on across the way, evidence of how one's own musical taste can encompass many emotions.
Later on The Cure came out in darkness, all wearing black with frontman Robert Smith in a sequins and full makeup. He surveyed the enormous audience before beginning another gig through the decades,  his wiry hair surrounded his head like a halo.  Smith's voice was strong and the band were ever the polished professionals, churning through hits such as "Just Like Heaven," "Love Song" and "Pictures of You."  Hearing the songs back to back after such a long time, I was reminded how romantic these classic 80s hits were and was glad I wasn't alone in the crowd.  I actually went to see the band early on at The Ritz in New York City, when we all gasped at the percussive synths coming from newly introduced drum machines.  With everyone singing along to "Friday I'm in Love," the night created a love fest of fans old and new connecting to this music, which no one really knew would stand the test of time. Check out The Cure and more in the highlights video below. 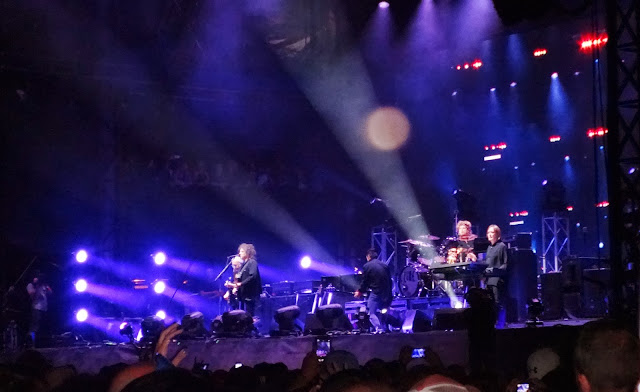