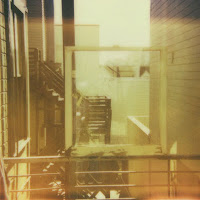 Painted Palms is the music project of two cousins, Reese Donohue and Chris Prudhomme, who first began to compose songs with each other from separate states by emailing files and chatting by phone. Their dreamy indie pop tune "All of Us," off their self-released EP Canopy, was featured in my Summer 2011 New Music Playlist. The songs also caught the ear of Kevin Barnes, who invited them along on a nationwide tour with his band of Montreal.  Painted Palms quickly evolved into a five piece band to take advantage of this opportunity, along with other opening gigs with STRFKR and Braids.

Now their debut album Carousel is ready to drop April 2 via Polyvinyl Record Company.  (They are being released as a limited edition 7" vinyl for $6; pre-orders are rewarded by an instant full-album download.)  The title track, "Carousel," swings easily with breathy singing extolling the virtues of beautiful friends over sun drenched synths.  "Click" picks up the pace, creating interwoven melodies plus background vocals over a layered percussive vibe.