Django Django was one of my picks for best new artists in 2012, so I was eager to see them play live in Brooklyn March 6.  It was the first of two sold out shows at the Music Hall of Williamsburg as they
tour along the way to SXSW, so with the pride of an early adopter I watched them wow the crowd. The U.K. band played their crazy-catchy indie pop tunes with an appropriate amped up energy to get the place hopping.  (Literally, there was lots of 80s style pogo sticking going on!) The constant strobe lights made capturing the concert visually quite a challenge, but it's that shared experience on site that's still the most important thing.

Official write up for PopMatters is here, plus extra photos and videos below. 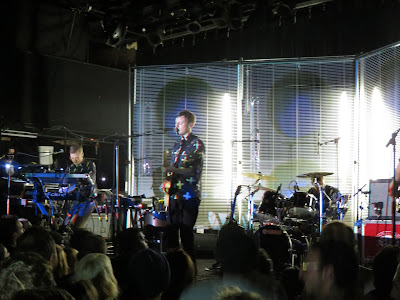