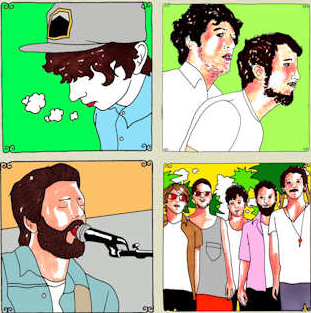 Mr Daytrotter has also rolled out a Coachella 2013 Playlist, with the entire lineup represented in past Daytrotter sessions.  The festival is planned over two weekends to capitalize on the crowds, April 12 - 14 and April 19 - 21 (info at Coachella.com).


There's recent blog mentions Youth Lagoon and Beach House, along with established faves such as Vampire Weekend and Portugal. The Man.  Of course, some groups overlap with Daytrotter's Bonnaroo 2013 Playlist, reflecting the busy touring schedules of Grizzly Bear, Wild Nothing, The Lumineers, Tame Impala and others. Check out the sleepy sounds of the already buzzed about Jake Bugg and an alarmingly stripped down version of Two Door Cinema Club's "Something Good Can Work."  As always, there's plenty more where all this comes from by visiting individual artists' sessions in the archives -- just pony up that $2 a month subscription fee.