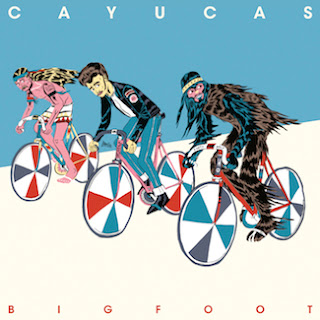 New band Cayucas has a busy schedule at SXSW this week after joining blog fave Ra Ra Riot for a West Coast tour.  Their song "Cayucas" was KEXP song of the day a while back and I've also been hearing "High School Lover" on the airways.  Both are gem-like indie pop tunes, with a sunny California vibe that is actually true to their roots (the name and song refers to a place on the coast midway between L.A. and San Jose).

"High School Lover" has all of my favorite pop song elements: shout outs, a sing along chorus and funky groove.  The story revolves around a girl who used to write letters to band leader Zach Yudin, who never responded in typical teenage fashion, even though he liked her back.Their video even shows the band playing their instruments (as discussed before, my favorite kind of visual) and is adorably animated with a sweet ending that concludes with a couple dancing.  It's directed by Cameron Dutra in a "live-action stop motion"effect he developed, and features lead singer Zach Yudin with twin brother Ben on bass, along with Banah Winn on keys and drummer Casey Wojtalewicz.

Their debut album Bigfoot will be out April 30 via Secretly Canadian, but a preorder is available through SC Distribution.  A $19.99 bundle offers an instant download, poster of the album artwork here and appropriately enough, a beach ball with a Cayucas logo.