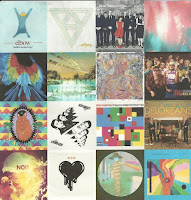 With the 4th of July holiday over, summer is in full swing and here's a new tunes playlist ready to provide a soundtrack for everything on the list. From picnics and BBQs to hanging at the beach, the season is just meant to be lived outdoors. A bevy of new releases filled much of the space, rounded out by a few tracks saved from earlier in the year since they seemed more suited for summer. Link here, enjoy!

1. Make Some Noise/Beastie Boys
Doing their thing since 1979, the Beastie Boys return with a new release, Hot Sauce Committee Part Two. (The part one was put aside as Adam "MCA" Yauch underwent treatment for cancer.) This lead track is unapologetically recognizable as a Beastie Boys creation, finding new influences from the current music scene.

2. Lost Weekend/Art Brut
UK's indie rock band Art Brut is also back with a new collection of songs, titled Brilliant! Tragic! This is the first single off the release, full of their signature wry lyrics and quirky mix of influences.

3. King Of the Beach/Wavves
Though this song came out last fall as part of a release with the same name, it seemed destined for a summer playlist. Nathan Williams is the mastermind behind the music, updating the surf music sound with indie's current love of lo-fi production from his hometown of San Diego.

4. All of Us/Painted Palms
The lush synth-pop of Painted Palms is the happy result of collaborating cousins Christopher Prudhomme and Reese Donohue. Their EP Canopy was put together via email and phone conversations with files passed over the internet, but they quickly put together a five-piece band to tour with Of Montreal.

5. Work/The Bewitched Hands
This French indie pop band recently dropped "On the Top of Our Heads" from their name, but the new release, Birds and Drums, is filled of their fuzzed out compositions per usual. In "Work," the group expands the sound for a crowd sing along which makes room for a classic guitar solo.

6. Stone Rollin'/Raphael Saadiq
The R & B singer/producer Raphael Saadiq put together Stone Rollin after playing most of the instruments and adding his signature vocal style. It's a collection of retro cool that's perfect for hot nights of summer.

7. Two Against One/Daniel Luppi and Danger Mouse
This song is the result of a five-year project by composer and arranger Daniel Luppi with producer Danger Mouse. The release, Rome, serves as an homage to the soundtracks of classic Italian Spaghetti westerns with vocal contributions from Jack White and Nora Jones, but never gets stuck in past conventions.

8. Seer/Motopony
Motopony hails from the Seattle scene as fronted by Fashion Designer and songwriter Daniel Blue. His bluesy vocals fit perfectly over the funky grooves of the band, while instruments play off of one another in a burst of energy. "Seer" is off their self-titled, debut release.

9. Buffalo/The Deloreans
This band from Louisville, Kentucky, calls its music 'eccentric power pop' with confidence. "Buffalo" is off of their second release American Craze, with soaring wall of sound choruses about the thrill of being animals in pastures.

10. True Loves/Hooray For Earth
Hooray for Earth takes their name from a Nickelodeon cartoon and is now based in NYC, having moved from the Boston area. "True Loves" is also the name of their first full-length release, where this track finds a place smack in the middle with a power chord intro.

11. Neat Little Rows/Elbow
12. The Birds/Elbow
The UK alt band Elbow has played together since 1990 with five studio releases. The latest, Build a Rocket Boys, is full of complex songwriting presented by the warm baritone of frontman Guy Garvey.

13. Do It Again/Holy Ghost!
This electropop duo grew up together in NYC and are also known for remix work of fellow playlisters Friendly Fires and Moby. "Do It Again" is the single off their first full-length, self-titled release, confidently presenting their musical perspective with catchy synth phrases.

15. Truth/Alexander
Alexander Ebert is best known for his alter ego, fronting Edward Sharpe and the Magnetic Zeros. He also serves as the voice for the band Ima Robot but his first solo release as a singer-songwriter, Alexander, allows his earthy all-knowing vibe to take over the proceedings.

16. The Day/Moby
This is the only track where Moby is singing on his latest release, Destroyed, a collection of songs written in the middle of the night while on tour in cities around the world. The soaring chorus is classic Moby, with heartstrings attached and a synth pulse driving the melody.

18. Our Hearts of Ruin/Blue Sky Black Death
With a band name lifted from a sky diving phrase (abbreviated as BSDD), this production duo based in Seattle churns out hip hop and instrumental music. There's an indulgent mix of live instrumentation and sampling in their songs as evidenced in this lead track from their latest release, Noir.
Posted by JaneJS at 1:22 PM
Email ThisBlogThis!Share to TwitterShare to FacebookShare to Pinterest
Labels: Alexander, Art Brut, Beastie Boys, Elbow, Holy Ghost, Hooray For Earth, Moby, Motopony, Painted Palms, The Deloreans, Wavves
Newer Post Older Post Home