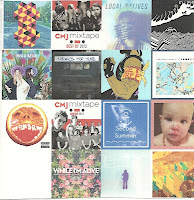 The year has started with enough music for another new music playlist and then some! Many selections are singles from upcoming releases that aren't even out yet but the songs sound strong enough to want to share immediately, from Jim James, Foxygen, and Unknown Mortal Orchestra, to STRFKR, Major Lazer and Atoms for Peace.  Other tunes are stand alone singles that need no padding to release on their own. It all bodes well for 2013, so dig in. Link to listen here.

1. "Whitby" -- The Octopus Project
Austin-based indie electropop group The Octopus Project has released an infectious single "Whitby," as part of a digital Whitby EP.  The song features the vocals of Yvonne Lambert, veering away from the instrumental but always melodic ways of the band.

2. "Second Summer" -- YACHT
This song from indie electropop band YACHT is a single in honor of the Portland/Texas/L.A. group's tenth anniversary by its core, Jona Bechtoit and Claire L. Evans. "Second Summer" is a supposed state of mind, flaunting their goal "to create environments of total freedom," along with an instant dance party everywhere they go.

3. "Breakers" -- Local Natives
Local Natives is an indie rock quartet from Los Angeles, expanding their sound to include atmospheric instrumental breaks as evidenced in the "Breakers" introduction.  The song is a single from their upcoming sophomore album, Hummingbird.

5. "Off" -- Frightened Rabbit
Scottish indie rock band Frightened Rabbit is about to release their fourth album, but this song is from last fall's EP State Hospital.  The airy introduction creates a melancholy mood, before the down home jam by the quartet kicks in with Scott Hutchinson's gritty vocals.

6. "Nothing Arrived" -- Villagers
Villagers is an Irish indie rock quintet with soaring melodies, piano and acoustic guitar strumming supplying the heartfelt core of their music.  "Nothing Arrived" is off of their second album, {Awayland}.

7. "Only Heather" -- Wild Nothing
Jack Tatum's music project Wild Nothing released a sophomore album, Nocturne, in 2012.  His songs combine dream pop with indie rock, with a backing band for the live group sound.

8. "While I'm Alive" -- STRFKR
STRFKR is a new abbreviation for Portland's electronica band a.k.a. Starfucker.  The quartet overlays pop melodies and dance grooves that defy identification.  "While I'm Alive" is the opening track to the group's third album, Miracle Mile.

11. "Default" -- Atoms for Peace
Atoms for Peace is a super group side project of Thom Yorke (Radiohead) and Flea (Red Hot Chili Peppers).  The quintet displays the complexities of sound similar to Radiohead in "Default," the single off the upcoming album called Amok.

12. "Shuggie" -- Foxygen
Jonathan Rado and Sam France are the songwriters for this new band, embracing a retro psychedelia which still sounds funky and fresh without being sardonic.  "Shuggie" is the single from their debut album, We Are the 21st Century Ambassadors of Peace and Magic.

13. "Beta Love" -- Ra Ra Riot
Ra Ra Riot is now a quartet, streamlined for the new electropop focus in their third album (also called Beta Love).  Wes Miles' falsetto calls everyone to the dance floor to the punctuation of synths, and fans should be eager to loosen up.

14. "Know You" -- Wild Belle
This sibling duo from Chicago brings on the reggae, via heavy reverb and indie sensibilities.  Natalie Bergman's enchanting vocals streamline the transition throughout their debut three song single.

15. "Know Til Now" -- Jim James
Jim James, the frontman of Louisville's psych rock band My Morning Jacket, releases his first solo album (under his own name) with the upcoming debut, Regions of Light and Sound.  "Know Til Now" mixes soulful vocals and bass heavy R&B without any restrictions of a group think.

16. "Get Free" -- Major Lazer
DJ/producer Diplo returns to his musical project Major Lazer with a second studio album due in February, Free the Universe.  Amber Coffman of The Dirty Projectors lends her idiosyncratic style, singing over the exotic synth layers and reggae beat.