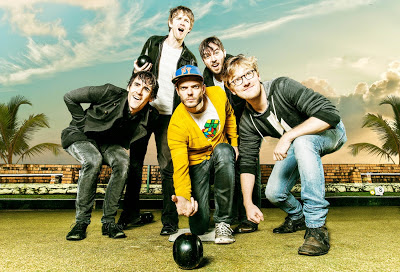 Brisbane indie-pop band Hey Geronimo have been celebrating the Australian summer with the video for "Dreamboat Jack," garnering over 50,000 hits on YouTube.  Billed as "aka The Greatest Puppet Chase Ever Filmed," the adorable stand-in characters face classic obstacles such as a plate glass window, a wayward dog and even fragile eggs as they speed along.  The song is from the group's self-titled EP released last June.

The quintet is a composite of band members from Blame Ringo, Montpelier and The Boat People.  Lead singer Pete Kilroy directed the video, with the help of Joe Brumm of Studio Joho (where they create loads of projects for College Humour).  Kilroy explains the idea behind the footage. "We had one of those little GoPro cameras and thought - let's strap this to a remote controlled car! And a boat! And a plane!!"  While the catchy tune is obscured a bit by sound effects,  the alternative is to check out the audio only as provided below (or on the Hey Geronimo Soundcloud page here).  But what fun is that?