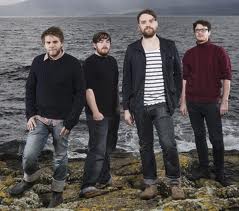 Here's an example of my favorite kind of video for a new song, Frightened Rabbit's "Dead Now" (from their upcoming album, Pedestrian Verse, due February 5). Scott Hutchinson's earthy vocals anchor the rollicking tune from the indie rockers, as we await their fourth collection.  Although basically just a home movie of the Scottish band coming to New York City, this travelogue idea never gets old in my book.  It's like you're hanging out with the band: going backstage, groggy people getting off the tour bus, walking together through Rockefeller Center.  Footage of their raucous stage show and crowd shots remind me off all the videos piling up on the NMMatterscorp YouTube Channel, with fond memories of live shows galore.

The concept is easy for any band, requiring a minimum of effort beyond careful editing.  But I never tire of this idea. Allowing an insider look always makes fascinating footage and of course I'm partial to the energy of New York City - the city that never sleeps.