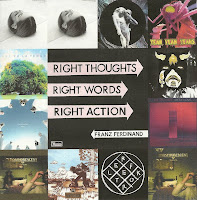 Here is a slightly ranked profile of my personal faves for Top Ten Releases of 2013.  As I compiled the list, I realized that I'm lucky to have seen all but TWO bands in concert (can you guess which ones?) To accompany each pick, I found a live video to show the band in action -- most in mid-size venues that I prefer, so not to get overwhelmed or lost in the crowd. However, the best one for Yo La Tengo is from the Pitchfork Music Festival, perhaps a nod to my own experience this year at the massive ACL Music Festival in Austin, Texas. Late night television is also an impressive source for catching performances of kinds of new music, all online afterwards so there's no need to stay up late! And of course, some are directly from the NMMatterscorp YouTube channel archives as bands toured in support of these albums. With that I give thanks as always to my video guy Paul and his calm, steady hand with the flip camera. Plus, be sure to check out the honorable mentions at the end of the post. Onward!


1. Arcade Fire, Reflektor
Reflektor, the highly anticipated fourth album by Arcade Fire, finally arrived at the end of October but most of the fans attending the not-so secret show in Brooklyn on October 18th were already well acquainted with it.  (Maybe if I had my hands on a preview, we wouldn't have been punked by the stage switch captured in this video, knowing there would be plenty of congas needed -- all is forgiven, really I need to move on!)  The band had wanted to collaborate with James Murphy of LCD Soundsystem and DFA Records for 2010's The Suburbs, but he was unavailable at the time.  Yet the delay actually seems beneficial in retrospect, now that the influx of EDM has everyone used to getting their groove on.

2. Moby, Innocents
Moby utilized a spirit of collaboration for his eleventh studio album, Innocents, enlisting the likes of Damien Jurado, Cold Specks and (my favorite) Wayne Coyne of The Flaming Lips.  In this video after the shoot for fave track, "The Perfect Life," a sing along breaks out as Coyne applied his frontman skills to get everyone to join in, including this fan -- no matter how many times I hear this song! Moby is still working the full band sound that he returned to for the last album, 2011's Destroyed. (I caught him live that year at Moogfest 2011 after I interviewed him in his new home of L.A. a few months earlier.)  However, he can still work that trademark magic with heart-swelling instrumentals, as in the opening track "Everything That Rises" and "Going Wrong."


3. The National, Trouble Will Find Me
For their fourth album, Trouble Will Find Me, The National continues to explore its treatise of deeply sincere indie rock.  While I was in the throngs for their show at ACL, a guy commented how he just loved the voice of singer Matt Berninger and I had to agree, being smitten since first listen. The band has plenty of admirers and there's no pressure for detractors, so polarizers can just join in or go home.

4. Phosphorescent, Muchacho
Matthew Houck of Phosphorescent has another voice in indie rock that caught my ear right away.  There's a slight twang from Alabama roots and deeply personal lyrics provide an instant connection with fans during his sixth studio album, Muchacho. "Song for Zula" was heard everywhere yet I never tired of it, a sure sign of the everlasting power of great music. This year, I saw a some of Phosphorescent's set at ACL after being up close and personal at the Brooklyn Academy of Music's Crossing Brooklyn Ferry, both memorable moments with a veteran road warrior just strutting his stuff.


6. Okkervil River, The Silver Gymnasium
Okkervil River's seventh album, The Silver Gymnasium, finally brought me into the fan fold of this Austin band.  The thematic pull of a New England childhood certainly helped, but it was the rollicking, tuneful songs as conveyed by singer/songwriter Will Sheff that had this new material on repeat. Seeing their solid set at ACL just sealed the deal for a Top Ten spot.


7. Yo La Tengo, Fade
Hoboken's own indie rock trio Yo La Tengo released its thirteenth full length album this year, Fade.  While the lilting closing track, "Before We Run," was plucked for my Early Summer 2013 Playlist, "Ohm" and "It's Not Enough" are also beloved tracks from this collection.

8. Portugal. The Man, Evil Friends
Portland-based Portugal. The Man knows how to compose soulful alt rock that easily translates epic swells of emotion. I saw the band headlining CMJ 2011 at Terminal 5 and caught a glimpse of them recently at ACL, with an expanded lineup confidently presenting the new songs of this seventh album, Evil Friends. The music is timeless with the best intentions, a straight forward approach to the simple joy of rocking out.


9. Ra Ra Riot, Beta Love
Indie pop outfit Ra Ra Riot released its third album, Beta Love, back in January before heading out on tour (I caught them live at a hometown show in NYC after interviewing frontman Wes Miles). They forayed into electronica as the band regrouped as a quartet, resulting in a new danceability that left some fans confused but others, like me, thrilled.

10. Yeah Yeah Yeahs, Mosquito
NYC's indie rock trio, the Yeah Yeah Yeahs, returned to the scene with another blast of no hold barred musical creativity. The single, "Sacrilege," was featured on my Spring 2013 Playlist, with the powerhouse vocals of Karen O matched by a choir no less.