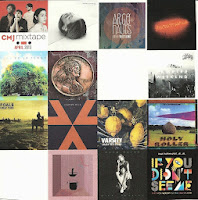 With Memorial Day the official start of summer, it’s time for another playlist to indulge in over the long weekend (along with the long awaited, new episodes of Arrested Development).  Highly anticipated albums by Vampire Weekend and The National, were released this month, along with new music by Deerhunter and Dale Earnhardt Jr. Jr.  Newcomers such as CHVRCHES and Hands fill out the list with new tunes from Yo La Tengo, Foals and Telekinisis and more.  Time to fire up the grill and crank the tunes.  Link to listen here, enjoy!

1.  “Varsity” – Smith Westerns
Chicago-based band Smith Westerns returns with their sophomore album in June, called Soft Will.  This teaser single “Varsity” shows the songwriting chops of brothers Cullen and Cameron Omori, as they embrace a classic pop ethic with their indie rock quartet.

3. “Ghosts and Creatures” – Telekinesis
Telekinesis is the musical project of Seattle native Michael Benjamin Lerner.  For his third album of indie rock, Dormarion, he traveled to Austin, Texas to record with Spoon drummer Jim Eno. (Eno’s studio is on Dormarion Lane.)

5. “Penny” – Hanni El Khatib
Hanni El Khatib grew up skateboarding in San Francisco and wrote music on the side while working at the skateboard fashion label HUF. Now a singer-songwriter based in L.A., he continues a cool skater vibe for his second album, Head in the Dirt (produced by Dan Auerbach of the Black Keys).

6. “If You Didn’t See Me (Then You Weren’t On the Dance Floor)” – Dale Earnhardt Jr. Jr.
Detroit’s indie pop songwriting duo, Daniel Zott and Daniel Epstein, expand their band to a four piece for their Patterns EP.  This single showcases their vocal harmonies and electronic embellishments plus a welcome sense of fun.

7. “Diane Young” – Vampire Weekend
NYC’s alt rockers Vampire Weekend released their third studio album this month, Modern Vampires of the City.  The four-piece made a deliberate decision to expand into other genres for drawing influences, evidenced in the rockabilly attitude of “Diane Young.”

9. “Trouble” – Hands
Hands is an indie rock band from L.A. formed by Geoff Halliday and Ryan Sweeney in Philadelphia, before switching coasts.  “Trouble” is the catchy single for their debut full-length, Synesthesia, full of swirling synths and intertwining melodies.

10. “Demons” – The National
Indie rock royalty The National just released its sixth album, Trouble Will Find Me, with “Demons” showcasing Matt Berninger’s melancholy baritone.  Backed by two sets of brothers, Berninger and band are now based in Brooklyn after finding each other in Cincinnati in 1999.

12. “The Missing” – Deerhunter
Deerhunter’s sixth album, Monomania, contains a collection of ambient noise rock along with shoegazing tunes such as “The Missing.”  The indie band was founded in 2001 by drummer/keyboardist Moses Archuleta and singer Bradford Cox (who also has a solo project, Atlas Sound).

13. “Recover” – CHVRCHES
Scottish electro pop trio CHVRCHES (pronounced Churches) has already made an impact with their debut EP, Recover.  The song "Recover" charges along with breathy vocals by Lauren Mayberry, with bandmates Iain Cook and Martin Doherty to complete the sound, recorded in a Glasgow basement.

14. “Before We Run” – Yo La Tengo
Indie rock stalwarts Yo La Tengo released its thirteenth album since forming back in 1984, called Fade.  “Before We Run” provides closure as the last track, a floating meditation sung by Georgia Hubley, sweetly building with percussion, horns and strings.

16. “Plastic Cup” – Low
Indie rock band Low formed in 1993 with a “slowcore” mantra of slowed down tempos and minimal instrumentation, manifest here in “Plastic Cup.”  Based in Duluth, Minnesota, the group has released their tenth album, The Invisible Way (produced by Jeff Tweedy of Wilco).