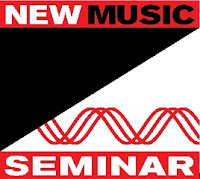 This year's New Music Seminar began in the dark yet hallowed halls of Webster Hall in NYC on a beautiful June afternoon, Father's Day even. It was strange to see the ballroom lined with rows plus a conference room set up on on the stage, podium and all.  I covered the 2011 New Music Seminar in L.A. , so I knew what to expect.  Speakers and panels representing various aspects of the biz in suits and half suits (jackets only) or studied casualness. In the crowd were individuals aspiring to cross over into these roles, or at least gain their attention -- fledgling artists in full costume even on a sunny afternoon.   As photos here attest, most of the panels featured presenters who were all GUYS,  representing how the music biz is unfortunately still run by a traditional boys network. I was certainly tempted to rush the stage during the one on music bloggers!
The Opening Night Party presented a full slate of performers across the genres from classically trained Evan Shimmers to hip hop YouTube sensation Hoodie Allen (videos below).  Then it was back to the scheduled seminars of presenters -- the real highlight was watching Tom Jackson work with a band on stage in rehearsal, putting into practice his principles of his workshop on live performance.  He was on a panel in L.A. commenting on bands via video but this time everyone could witness him in action as tepid stage presence was not tolerated.  Lord knows I've seen many bands who think if they play their music, fans should be grateful even though there's not even eye contact. Maybe it's my musical theatre background, but it's always nice to see some effort on stage to create a unique experience which can't be replicated -- Jackson call this creating 'moments' which fans crave. I met him afterwards and suggested a quick interview to expand on his new charity initiative linking non-profits with artists to raise big sums.  He couldn't have been nicer as we went around the corner for a quick lunch and chat which I recorded on my phone.  Turns out he's a bass player, should have known!  That cool, laid back vibe I know well from living with my husband/son...

Another highlight was the presentation by bass player Rick Goetz, "Everything You Need To Forget About the Music Business."  (Gotta wonder what's with all the bass players in my life -- the yin needed for my extreme yang?)  Goetz has a wide background from being in a band to a career at a major record label, as well as music supervision, band management and television producer.  Again, with that ubiquitous bass player cool, he offered practical DIY advice for creating marketing materials.  He listed the basics, from a "no apologies" four song recording that rocks, to a succinctly written bio/logo/website, a professional photo ("not the tired look of guys in front of a brick wall") and a live video "with a crowd" along with a presence on all the social media networks ("ensure all of the digital real estate is interconnected").  Goetz provided his own marketing tool, musiciancoaching.com, to continue the discussion and a free educational resource for any up-and-comers.

After it was all over I stayed home in CT, escaping NYC's first heat wave with a notebook full of notes to decipher as I tackled my official write up for PopMatters -- posted here and interview with Tom Jackson over lunch can be found here.