CBGB Festival Brings Spirit of the Place Back to New York City, July 5 – 8 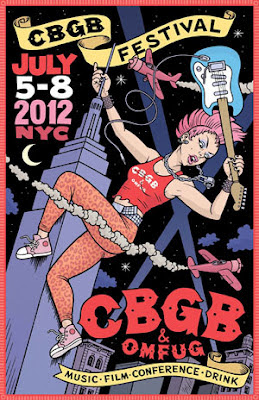 Just when you need a break from family 4th of July holiday gatherings, here comes a new event to remind New Yorkers about the rich history that once existed in the Bowery.  CBGBs was a haven for breaking punk and new waves bands under the devoted tutelage of owner Hilly Kristal.  He launched the careers of such stalwarts as Television, the Patti Smith Group, Blondie, The B-52s, Joan Jett & the Blackhearts and the Talking Heads.  The name stands for the genre Kristal had originally planned on booking for the club, Country, Bluegrass and Blues, and the addendum OMUG stood for "Other Music for Uplifting Gormandizers."  Rather than food, Kristal had rabid music consumption in mind yet it became a bastion for the new music of the day.

Seeking to rekindle this spirit and rejuvenate the brand that is CBGBs -- beyond T-shirts and the awning that exists in Cleveland at the Rock and Roll Hall of Fame -- the festival will feature rock and roll film screenings, band showcases (300 artists in 30 venues), music business conferences and industry panel discussions.  To stamp an attitude on the proceedings, Nirvana’s Kris Novoselic will be the Keynote Speaker on noon, July 5.  Along with the usual music industry subjects of marketing and record deals, there will also be a panel on “CBGB – Tales From the Club.”  Film subjects include bands such as The Clash, The Replacements, and the Ramones, along with Wilco and Kurt Cobain.  Many screenings include Q & A sessions with those in the film or behind the scenes.  A few of the artists appearing during the festival are Superchunk, David Johansen, Dale Earnhardt Jr. Jr., Reggie Watts and The Virgins.  Saturday afternoon brings together Guided by Voices, The Pains of Being Pure at Heart, The War on Drugs and Cloud Nothings at the SummerStage at Central Park.  A Spirits Festival on Sunday, July 8 highlights artisan whiskey distilleries across town.

Pricing is on a sliding scale according to how many offerings are of interest. Pass categories are defined as Music Showcases, Film Screenings + Film Conference, Music Showcases + Music Conference, Music/Film Combo, and the Spirits Festival.  Costs range from $79 to $379 with increases for walk-up purchases after July 3rd. For further information, visit cgbg.com.
Posted by JaneJS at 5:47 PM
Email ThisBlogThis!Share to TwitterShare to FacebookShare to Pinterest
Labels: CBGB Festival, Cloud Nothings, Dale Earnhardt Jr Jr., David Johansen, Guided by Voices, Reggie Watts, Superchunk, The Pains of Being Pure at Heart, The Virgins, The War on Drugs
Newer Post Older Post Home