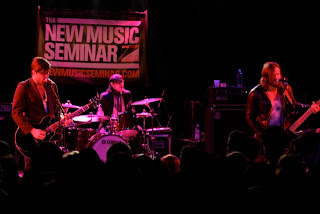 With the hum of the 101 Hollywood Freeway outside the Sheraton Universal in Los Angeles, the winter New Music Seminar (NMS) expanded to a multi-day and night event from February 14 through 16. The theme of a revolution inspired the attendees to build a new music industry model, “since the old one is fundamentally broken.” Beyond the typical sponsors, such as the likely combination of Mountain Dew and Cheetos logos on the podium, a few instances of bad feedback on the microphone and wayward embarrassingly uncool ringtones, the seminar had a lot to say about how things are for emerging artists.

The opening night party showcased a wide variety of performers across the new music spectrum. King Charles was touted as a “UK sensation,” yet this artist with the glamour of Prince gave a mellow performance alone on stage with his acoustic guitar. Jessie and Toy Boys represented the power of pop on the current charts, but their generic dance moves and formulaic material came off as a novelty act. Ben Hunter’s reggae also fell flat on stage, though would sound perfectly fine in the Caribbean sun. Of Verona had a solid rock sound with a strong female voice in Mandi Perkins, however the group seemed a conglomerate of people and not a band with a vision. Perkins is transitioning from singer/songwriter to being part of a full on rock ensemble, a work in progress. Blaqstarr covered the rap/dj scene with his set, though he failed to cover new ground. The Little Death finally made things a party with big, raw bluesy rock songs fronted by Laura Dawn with powerhouse vocals. When introducing the band, she referred to her stylish bassist in a black suit as Richard Hall, who would appear on two panels as Moby.

The next morning Tom Silverman, Co-Founder of the New Music Seminar and President of Tommy Boy records, called the sold-out conference event a “convention of creators” during his opening remarks. He reminded participants that they were all there to “serve our great love of music” whether the goal was to create, expose or monetize music. Using the video world’s term of “game over,” Silverman said it was time to press start and move on. Hauling out statistics to refute the notion of death of CDs, he described the single as the sun in the universe. Silverman explained how the music business always been about selling singles since that’s how fans are made. His model moves the record business to a fan relationship business and stressed how music is not just content to be had for free.
Panels and workshops continued the discussion with tools to break through the clutter of millions of bands on Myspace. From the basics of fan mailing lists to social media, sponsorships and licensing, artists were told to rethink the idea of a label centric existence and to monetize rather then block free plays. Grass root activities to build buzz from simple emails and touring still generates the most exposure, while basics like merch tables cannot be ignored. During a panel of top label executives, Ron Fair, Chairman of Geffen Records, said, “there still needs to be spirit guides.” A nice sentiment, even though these days this is clearly an indulgence for only few musicians.

As a reflection of this thinking, the NMS Artist on the Verge project finalists were chosen based on factors such as music sales (physical and digital), ticket sales, frequency of gigs, touring history, merchandise sales, media (both online and print), social media activity, and online buzz as determined by the NMS Music Committee. To be considered, artists must have never sold over 10,000 albums for any single album and not be signed to a label. From this collected data, the committee selects The Artist on the Verge Top 100 list and ultimately three Artist on the Verge Finalists.

These groups were chosen from more than 800 acts to perform in a showcase: Mike Del Rio, The Daylights and Shinobi Ninja. Local band Nylon Pink opened the evening, winners of a separate Reverbnation contest. Proudly described as “Hello Kitty on Acid,” this powerpop girl group hit the stage with flailing arms over guitars while hopping on stage monitor speakers and a liberal use of cymbals on drums. Their high energy performance had no where to go, and a cover by The Go-Gos only reminded the audience that things could be more interesting than lyrics about a party monster or simply repeating “Bang Bang.”

Mike Del Rio is an independent singer/songwriter and producer from New York City who appeared fronting a big band. On stage there were two guitars, keyboards, a percussionist and a female drummer who stole the show with long blonde hair whips. Del Rio’s brown furry vest was thankfully too hot for the whole set so it became easier to focus on the pop sound with superficial lyrics such as “does he fuck you like you like?” He instituted sing-a-long lessons to the unfamiliar songs by imploring the crowd to “sing it back now.” Del Rio’s future as a muture artist is yet to be seen.

The Daylights are another LA band that began their performance with a long instrumental introduction. This trio (two brothers on bass and guitar along with a drummer) produced a big, reverberating sound that called to mind Muse or U-2. The darkened stage set a moody backdrop to long guitar solos and alt rock creations. They played polished songs that went overtime but the crowd didn’t mind at all.

Shinobi Ninja combines the diverse influences of Hip Hop, Punk, Soul, R&B and Metal. Formed in a NYC recording studio, the power group layers the genres into a sound that doesn’t seem completely original. With a metal rock trio backing a pair of rapper/singers and dj, their high-energy performance stirred the crowd to join in the mayhem.

Delegates voted by text the next day to award the grand prize to The Daylights. In this age of DIY music promotion, a cash advance is a thing of the past. So this $50,000 worth of instrument, plus marketing and promotion tools, should certainly help the band ascend to the next level and reach new audiences. For The Daylights, their revolution has begun.

NMS "Artist of the Verge Party" at The Roxy
http://www.youtube.com/watch?v=GCqKyN8hZU0