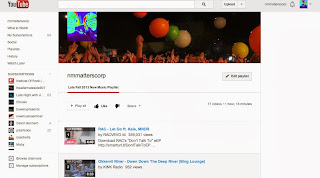 The latest compilation for Late Fall 2013 featured three songs that I wrote about individually so there's some repeats on this YouTube video playlist (Travis plus The Naked and The Famous) but I chose a live video from The Bing Lounge for The Wild Feathers, since they are just so fun to see in performance.  There's also a video from that venue for Okkervil River that I chose for their song, providing another glimpse at a band doing their thing.  The Midlake video shows them superimposed over colorful clouds during the song, yet it's still nice to see them in action. Same goes for the Phantogram video from The Current radio station in Minneapolis -- I welcome the opportunity to see these bands I haven't witnessed live in concert.

For those looking for some crafty film work, there's an arty black and white video for The Cults complete with floating vintage appliances and a sweet classic Beemer. Man Man's video is also harking to the past with old footage and script lettering for the lyrics. And Broken Bells released a "Pseudo Video" for their song "Holding on for Life" (just showing the album artwork with the audio), might as well call it what it is!  Enjoy the visuals at link here or below, although the first one makes me a bit squeamish...