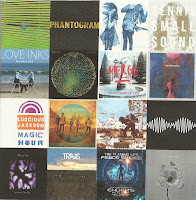 There’s plenty of new music around to create one more playlist for 2013. New bands such as The Wild Feathers and Love Inks make an appearance in this compilation while established groups such as Travis, Luscious Jackson and Mazzy Star return to the new music fold. Also back for another round are The Naked and Famous, Cults, Tennis, and Phantogram, while remixers RAC composed some songs of their own.  Artic Monkeys returns to its rock roots, Okkervil River finds a wider musical net with a nostalgic theme, and Broken Bells provide a glimpse of the next album.  Check out all this and more, plus a quiz about the longevity of some of the bands. Link to listen here.

**EXTRA CREDIT IF YOU CAN NAME EVERY BAND THAT EXISTED IN THE 90s -- WITH BONUS POINTS FOR ONES THAT HARK BACK TO THE 80s (ANSWER AT THE END OF THIS POST!)

1. "Let Go (featuring Kele & MDNR)" – RAC
RAC stands for Remix Artist Collective, a group of international musicians dedicated to the craft of melody-driven remixes.  After over 200 indie-focused tracks, founder André Allen Anjos, a native of Portugal living in Portland, has released an EP of original songs, Don’t Talk To, including this bouncy tune “Let Go.”

2. "Down Down the Deep River" – Okkervil River
This song is from The Silver Gymnasium, a concept album by Austin’s indie folk rock band Okkervil River (its seventh).  Lead singer Will Sheff mines his childhood in New Hampshire for an unflinching look back, which takes the six-piece into a new direction of tuneful melodies via captured images from the past.

4. "Are You Ready?" – Luscious Jackson
Luscious Jackson is back in the swing of things with that signature NYC swagger after toying with a reunion for years. As if asking the fans, “Are You Ready?,” this revamped quartet clearly is -- rocking full throttle through a fourth album, Magic Hour.

5. "Antiphon" – Midlake
“Antiphon” is the title track of the fourth album by Texas folk rock band Midlake, the first with guitarist Eric Pulido taking over lead vocals.  Majestic harmonies carry this quintet through a trajectory of emotion alluding to the plight of man, all while referencing an overthrown orator in ancient Greece.

6. "Hearts Like Ours" – The Naked and Famous
This New Zealand band landed in L.A. after touring the world to create its sophomore album, In Rolling Waves.  The swirling heartfelt chorus of “Hearts Like Ours” conveys lead singer Alisa Xayalith’s personal pain about losing her mother to breast cancer as a girl.

7. "Holding On for Life" – Broken Bells
Indie rock duo James Mercer of The Shins and artist-producer Danger Mouse are getting ready to release another album as Broken Bells, After the Disco. This single, “Holding On for Life,” alludes to that past scene with an archetypal falsetto chorus.

9.  "Black Out Days" – Phantogram
Phantogram is an electronic duo founded by Sarah Barthel and Josh Carter, friends since teenagers in upstate New York.  “Black Out Days” is an echoing tune off a self-titled EP with second full album, Voices, up next.

10. "Do I Wanna Know?" – Arctic Monkeys
English indie rock band Arctic Monkeys formed in 2002 and have explored different genres through their five albums. The latest is, AM, named for the group initials with a nod to The Velvet Underground’s VU. Classic hand claps and foot stomps make way for singer Alex Turner’s rapid-fire delivery in “Do I Wanna Know?”

12. "Head On" – Man Man
“Head On” is a the melodic single from On Oni Pond, experimental Philly band Man Man’s fifth album since 2003.  The multi-instrumental jam plays off the laid back vibe of lead singer and lyricist Honus Honus.

13. "The Ceiling" – The Wild Feathers
This Nashville quintet has roots in Texas and Oklahoma, along a shared love of 70s country rock that saturates their self-titled debut. The full on vocals in “The Ceiling” convey an infectious chemistry between these former lead singers.

14.  "Outta Sight" – Love Inks
Love Inks is a trio that self-recorded a debut LP, Generation Club, on a half-inch tape machine in their hometown of Austin, Texas. Lead singer Sherry LeBlanc croons over synth beats and key strikes with a pining lustful urgency.