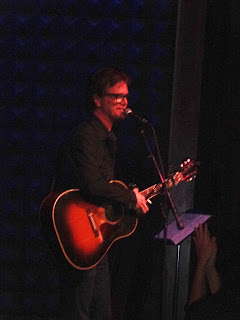 Dan Wilson appeared for a sold out show at the intimate room that is now a redo of Joe's Pub. (There's a new entrance through the Public Theater and spiffed up interior, but thankfully you can still feel the soft rumble of the NYC subways under foot.) He unfolded his lanky frame through the tiny stage door with his beat up acoustic guitar, wearing jeans and a denim shirt. Brad Gordon was also there to provide accompaniment on piano or via a keyboard that rested on top. In his low key way, Wilson thanked everyone for coming and surveyed the set up, saying simply, "Alright, everything seems to be where it should." And it was throughout the night, as fans were captivated in their seats by this singer/songwriter's every utterance.

The evening was billed as "Words and Music with Dan Wilson" but it could have been "Words, Drawings and Music with Dan Wilson" as a charming illustrated set let was passed out afterwards (check out my autographed copy at the end of this post). This visual arts grad from Harvard actually pursued a career as a painter before learning bass to be in a band after years of piano lessons.  His connection to all the arts are still extremely strong, as life's experiences have only enhanced the poetry in the lyrics.

Wilson talked about being in a band and becoming a father (which led to the Semisonic hit "Closing Time," although he still can't believe no one got the double meaning. Check this YouTube video for the full story.)  He also shared the heartache of being caretaker for a disabled child (which inspired the song "Your Brighter Days").  He spoke about co-writing songs with "strong women" such as Carole King, The Dixie Chicks and of course, Adele, who he collaborated with for three songs on her 2012 Grammy winning album, 21. Some of these stories I had heard during an interview I wrote for PopMatters right after this Grammy moment, but it was still a thrill to hear them in person.

The songs came alive as his familiar voice released into the room, with that clear Midwestern sincerity.  Wilson joked about how he liked working with women as men tend to write about the "furniture," which usually included cars or trucks.  He confided how he actually likes being a "wuss." Instead of Field & Stream or Guns & Ammo, Wilson would rather publish titles such as Poetry & Peacefulness or Expresso & Journaling.  Clearly, this is a guy who not only knows his limits but is able to see the humor in it all and the crowd enjoyed laughing along with him.

The highlight of the evening centered around the audience's encouragement for his new single, "Disappearing." (It is from an upcoming album due in 2014.) This song has a new lyric video with illustrations and lettering by Wilson, as directed by Noah Lamberth.  Like the music, his art has a timelessness that makes it readily accessible yet perfectly poignant.  While it came off as a lovely tune live, when I read the words with these enchanting visuals as the chorus repeats it pulled at the heartstrings even more.