Unearthed Gem of a Song: "The Golden Path" by The Chemical Brothers & The Flaming Lips 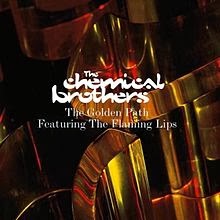 I have extolled the virtue of radio -- online or otherwise -- as a source for new music but it can also bring a song into your day that you haven't heard in so long that it feels like new.  Such was the case when "The Golden Path" aired on KEXP last week.  I felt the thrill of discovery all over again, even as I remembered how I loved the song when it appeared as a single back in 2003.  It has an intricate, electronic chug provided by The Chemical Brothers underneath that wacky laid back yet timeless vibe, via vocals by The Flaming Lips frontman Wayne Coyne. Stephen Drozd of the band chimes in with the transcendent harmonies during the chorus.

The first thing I did was buy a copy for my music stash, which immediately felt bereft without it. (Maybe I owned a CD of it at one point? The cover artwork here does look familiar.) Looking online for a video, I found this live version from the MTV 2003 European Music Awards at a huge outdoor venue. While I have issues with the constant swirling crowd shots and cropped close ups of the performers, Coyne's stage presence is always a joy to behold.  It's fun to see his shout outs translated, for example "Come on everybody!" becomes "Vamos todos!"  He even slips in how he's going to tell us a little story before starting the down the lyrical path, allowing more Oklahoman country twang than in the produced track.

Check out the video below and if this song isn't in your collection, it should be!  Plus, another required update is "Peace Sword," The Flaming Lips' epic new song from the movie The Ender's Game.