iTunes Ping Is Not Dead -- Yet

Earlier this month, Apple announced that the next version of iTunes will offer the Facebook and Twitter integrations that Ping was supposed to provide on its own. Ping would no longer accept members and a simple statement was posted on the site, "Ping will no longer be available as of September 30." (It still appears along the bottom of the webpage today, see screenshots below.) Introduced in September 2010, Steve Jobs had hoped this "all about music" social networking "recommender system" would catch on as wildly as fans hopped on iTunes.  But Facebook originally blocked access, and things never quite took off.

TechCrunch declared "Nobody was using Ping anyway" so to remove it would erase any memory of "one of Apple's rare flops."  I actually embraced it over a year ago as a way for people to easily purchase my new music playlists, and add them to their iTunes catalogue by posting a link to my Ping profile. I didn't spend much time on my profile, not loving how it chose genres for me according to my purchases (Alternative, Electric, Rock) and listed my purchases. (Although I could go in and remove them afterwards if I only remembered to do so!)

A few months ago, I was having issues with the site when a playlist would not "publish" on Ping (usually a simple click would make this happen, plus I'd run into this problem before).  I emailed Apple support and by the time I heard back, the situation had righted itself.  Then there was a follow up email wondering if the techie had competently answered my questions.  Well, I had also asked if Ping was headed for the trash heap -- not in those words perhaps -- but of course that was not addressed.  I have to say, I will miss being able to provide this option for my readers.

iTunes 11 due later this month will eliminate the static entry page, allowing artists to post photos, followers and concert listings. But it will also display Facebook friends who liked each entry and Facebook/Twitter sharing for purchases, which just sounds like unnecessary clutter.  With a successful redesign of myspace.com and subscription based sites such as Spotify coming into their own, music fans will have options galore anyway.  Besides there's nothing wrong with reading blogs, other pubs or good ol' fashioned word of mouth when courting new music discovery! 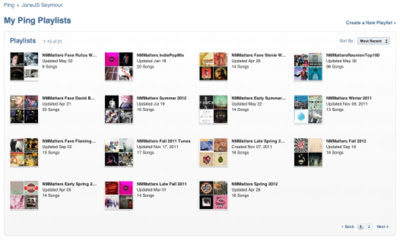