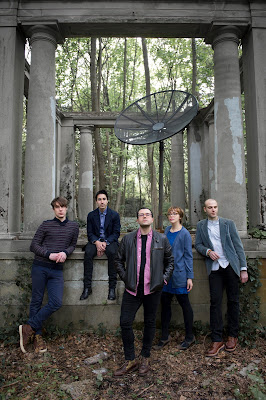 I've given the new Freelance Whales songs a few listens and the whole collection is really growing on me.  I always thought of the band as a little too indie for even my taste, venturing into outer regions of musical composition as only multi-instrumentalists could do. Their likable song "Kilojoules" was featured in HBO's Bored to Death as the group made the rounds on tour after releasing their debut album, Weathervanes. I simply found them a bit too organic in their approach.

The new songs have a broader appeal with more layers of sound and solid percussive backbone. Choruses build with abandon amid harmonies of instruments and like minded voices. It's a pleasing journey through various musical approaches, all worth a trip.

NPR is streaming the sophomore album, Diluvia, as part of their First Listen program until the release date next Tuesday, October 9.  The band is also offering a stream of Weathervanes on their website here for those who'd like to visit (or revisit) that one.  They are currently on tour -- for a complete listing of dates see below.