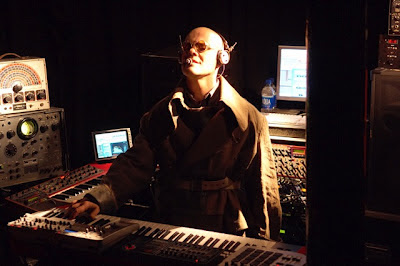 Moog Music has named Thomas Dolby the recipient of the 2012 Moog Innovation Award Winner, "for expanding the sonic boundaries of the new wave movement and for fearlessly embracing the future."  Moog Music will present Dolby with a custom Minimoog Voyager during this year's Moogfest in Asheville, North Carolina, October 26 and 27.  He is the third recipient of the award, following DEVO in 2010 and Brian Eno last year.

Born in London as Thomas Morgan Robertson, Dolby sang in a choir before picking up a guitar but did not receive any formal musical training.  When electronic instruments appeared in the 70s, he discovered his life's passion after acquiring a kit built synthesizer. His friends nicknamed him Dolby after Dolby Laboratories in honor of the hours spent learning about this new musical frontier.  He is best known, of course, for the 1982 hit "She Blinded Me With Science," which was inescapable at the time.  Instantly recognizable from the cascading synths that opens the track, Dolby's delivery was both playfully scolding and sizzling like a rock star. He went on to create five studio albums, along with designing his own synths and founding his own software company.  Since 2001, Dolby has also served as  Musical Director for the Ted Conference annual series.