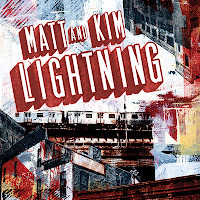 **UPDATE: kcrw.com is streaming the album from October 2 - 8 at link here.

Making a bold play for a wider audience, Matt and Kim are streaming their new album, Lightning, on Entertainment Weekly’s website (EW.com) before the October 2 release date.  Almost barely recognizable in their glammy Hollywood makeover “after” photograph on the webpage, most songs ring true to their usual fast or faster tempo of dance punk.  The lack of gravitas in their music is precisely the point – Matt Johnson’s yelping vocals have a cheery child-pleasing upbeat delivery with plenty of sing along choruses for fans to join in.  This time around Kim joins him in singing a few lines, a welcome addition to their formula.

The new collection begins with the single, “Let’s Go,” a pre-released track reviewed back in June and plucked to lead off my Fall New Music Playlist, poised ready for take off.  Next up is “Now,” a song that has Matt conceding that “things aren’t perfect” over a frenzied beat with a warning siren cascading into the fray.  A marching band drumbeat follows in “It’s Alright,” with a simplistic keyboard melody embellished with handclaps and a numbered countdown to fun.  The slow jam of “I Said” varies the proceedings, with Matt musing about how “We could take over the whole world, or at least a small piece.”

But the dance floor beat of “Tonight” takes things right back to party town, a tribute to nights out in their hometown of New York with no one “worried about tomorrow.”  Techno cravings are explored in “I Wonder,” with unnecessary vocal experiments and Kim singing, “I wonder what I would have become,” perhaps if not being half of a band.  These two met in art school where music was just part of the creative process, falling into gigs in the fertile indie ground of Brooklyn.  The closing number, “Ten Dollars I Found,” is a surprisingly sweet blend of their voices.  This duet showcases Matt and Kim as a typical yin-yang personality type couple, where a fine balance is created by equalizing each other’s energies.  Track listing below and listen at link here.