Deerhoof and Friends in New Video for "Fête D’Adieu" 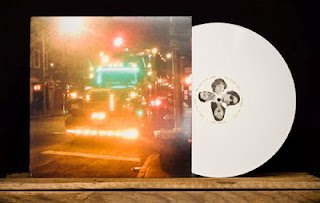 Deerhoof's newest album, Breakup Song, mostly contains the squirmy scrunch of instruments that has this group originally from San Francisco proudly call themselves a noise band.  Since 1994 they have self-produced twelve albums, along with many tracks on compilations, split releases with other artists and 7" singles.  With the sing song soprano of Satomi Matsuzaki leading the way, the band has left me perplexed and uninterested many times.  However, with this new song "Fête D’Adieu," the promise of interpretive dance had me checking out the video recently shot in a Brooklyn park "with friends."

Director Elias Gwin allows the movement to build until the floppy arms of brown-shirted, bearded Steven Reker takes over in a solo.  This modern dancer went on tour with David Byrne in 2009 when I first experienced him on stage, giving into every pose with a warm, bemused artistry.  Reker also has his own band, People Get Ready, performing in constant motion (as documented in our NMMatterscorp highlights video from Crossing Brooklyn Ferry last May) even with a guitar around his neck.  Check out their soundcloud page to listen to this percussive, and of course, danceable music.

According to Deerhoof's label, Polyvinyl Records, the video for "Fête D’Adieu" aims to capture the bittersweet irony of the song's title, which translates to "happy farewell."  As the last song of the album, this sweet rocking tune will satisfy many a fan, old or new.  Breakup Song is available in bundles with previous Deerhoof vinyl and new t-shirt designs or as a digital download.