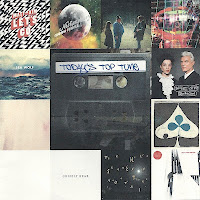 Here’s a selection of new music off highly anticipated releases from indie strongholds Grizzly Bear and Animal Collective along with singles from upcoming releases from Tame Impala and Matt and Kim.  New super group Divine Fits provided a strong entry of solid songs while David Byrne handpicked Annie Clark (a.k.a. St. Vincent) for another collaborative project.  With so much new music out recently, a Late Fall New Music Playlist is already in the works -- of course that’s never a bad thing! Link to listen here.

2. “Fineshrine” – Purity Ring
New band Purity Ring is also a duo – Canadians Corin Roddick and Megan James wrote the songs for their debut album, Shrines, miles apart but they quickly became noticed in the international music scene for a hybrid of eclectic electro pop.  James’ voice is at once commanding and childlike, while instrumentalist Roddick provides synth beats for the foundation.

6. “Would That Not Be Nice” - Divine Fits
Britt Daniels of Spoon and Dan Boeckner of Handsome Furs and Wolfe Parade joined forces to create the new band Divine Fits.  This single of their debut album, A Thing Called Divine Fits, has Daniels’ familiar barking vocals leading the way in a confident pairing of like-minded indie rock musicians.

7. “Summertime Is Coming” – Paul Banks
Interpol’s frontman Paul Bank returns to his side project for another EP, Julian Plenti Lives… although the songs will soon be folded into a full length album simply called Banks.  “Summertime Is Coming” highlights the familiar baritone, finding his swagger alone in the forefront of his own musical vision.

10. “Who” – David Byrne & St. Vincent
David Byrne continues his crazy work ethic by releasing an album Love This Giant, with Annie Clark, who channels her own iconic persona as St. Vincent.  The quirky texture with Byrne’s distinctive vocals carry the tune with a horn section lending a funky vibe in this single, “Who.”

13. Applesauce – Animal Collective
Experimental psych band Animal Collective is back with their eleventh album, Centipede Hz.  “Applesauce” is a fun romp from the prolific group originally based in Baltimore, and each member has their own side project to keep them busy as well.

14. “Old Friend” – Sea Wolf
Indie folk artist Alex Brown Church has created four releases as Sea Wolf, channeling a laid back persona for a catalogue of intimate songs.   “Old Friend” is a sweet tune over an intricate percussive backbone and the single off the latest album, Old World Romance.

15. “October” – The Helio Sequence
“October” is the single off Negotiations, the fifth full length album from this alt rock duo based near Portland. Brandon Summer (vocals) and Benjamin Weikel (drums/keyboards) put together a space out jam that glides along after the ethereal guitar intro.

16. “Alruccabah” – Nickodemus
Music Producer Nickodemus fosters a world view in the dance music scene after growing up amid the many cultures found in New York City.  “Alruccabah” is off his third album, Moon People, which includes many of his favorite collaborators such as Afrika Bambaataa, The Real Live Show, and Belleruche.