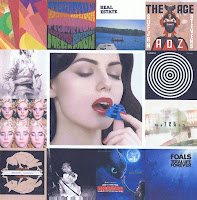 As soon as I finish one of my playlists, I start another. This one began in mid-October with a few songs then it sat for a bit until I had the opportunity to go to Moogfest in Asheville, North Carolina. This three-day festival was full of names I couldn’t wait to see, ones I had barely heard of and others worth exploring (see tracks by The Octopus Project, Devo, Caribou, Neon Indian, and Jonsi). Add in a few new releases and all of sudden another lengthy playlist was ready to share -- lots to be thankful for this Thanksgiving.  Link to listen here.


1. "Fuguefat" -- The Octopus Project
This full throttle song kicks off this Austin based group's fourth release, Hexadecagon. The indietronic band specializes in high energy instrumentals like this one which draws you in instantly for a wild, fun ride. (See my interview posted below for more info!)

2. "Total Life Forever" -- Foals
The Foals are five guys from Oxford, England with a bent towards the catchy yet complex compositions. This song is off their second release of the same name. It delivers simple sing-a-long lyrics over a driving beat and adds in hand claps just for fun – irresistible.

3. "Mind Games" -- Devo
4. "What We Do" -- Devo
Yes it's been twenty years since anything new from Devo, but you sure can't tell by these songs. The original energy in the synth-driven beats remain intact with tongue fully implanted in cheek. Their new release, Something for Everyone, is a party not to be missed.

5. "Odessa" -- Caribou
Caribou is the brain child of Daniel Victor Snaith, a prolific Canadian musician who also embraces the indietronic label. This melodic maze over an infectious groove is the opening track off his latest release, Swim.

6. "Coquet Coquette" -- Of Montreal
This band from Athens, GA has been exploring the psychedelic side of indie pop since 1994 with a raucous party of a stage show at every stop on tour. The lyrics border on crass insanity but they're always second to the sound presented. The song is off the latest release called False Priest.

7. "Should have Taken Acid With You" -- Neon Indian
8. "Deadbeat Summer" -- Neon Indian
Texan band Neon Indian is part of the new chillwave musical movement with fuzzy chords in a laid back vibe. They also grab samples as they see fit to provide a backbone to a song or merely as a reference. (For example, Deadbeat Summer contains a snippet of Todd Ruddgren's "Izzat Love?") These two selections are off their debut release from a year ago, Psychic Chasms, which has been gaining steam ever since.

9. "Desire Lines" -- Deerhunter
Deerhunter is a four-piece band with roots in Georgia and solid indie rock credentials. This melodic creation of layers is off their fourth album released earlier this fall, Halcyon Digest. Frontman Bradford Cox provides a soundscape over a drumbeat that expands into a dreamy song about childhood.

11. "Reservoir" -- Real Estate
12. "Out of Tune" -- Real Estate
These two songs are part of a mini-release from this band that calls themselves psychedelic surf pop under the indie rock label. It’s a bit bolder than anything so far, which brings a welcome burst of confidence. The quartet was originally from New Jersey but are now based in -- you guessed it -- Brooklyn.

13. "Get Real Get Right" -- Sufjan Stevens
Sufjan Stevens has composed this song for his tenth release called The Age of Adz, which delves into electronica along with the many other styles he's known for, from folk to art rock. He can play banjo, guitar, and drums as well as piano so there's always has an interesting use of instrumentation. Having bounced back after serious viral infection last year has only heightened the value of spiritual themes in his compositions.

14. "Go Do" -- Jonsi
15. "Sticks & Stone" -- Jonsi
Jonsi strikes out on his own for these solo project recordings, the first off his release Go and the second from the soundtrack of the magical movie, How to Train Your Dragon. Without the comfort of his band Sigur Ros and now singing in English, Jonsi is challenging himself while his musical gifts are up for grabs.

16. "Heretofore" -- Megafaun
The easy going sound of this trio from North Carolina by way of Wisconsin infiltrates this track off their mini-CD of the same name (their third release). They list "everything and everyone" as influences as the laid back layers invite all to relax and listen.