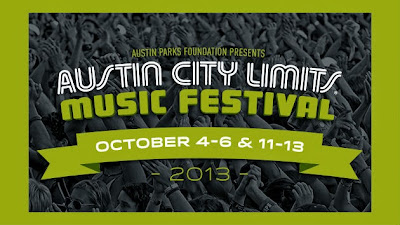 I'm finally going to Austin -- the line up for this year's Austin City Limits Music Festival was too tempting!  They've expanded it to two weekends just like Coachella, which may not be the best way to create a unique sense of excitement around an event. But at least it's not in the desert (or on a sprawling farm like Bonnaroo), but in a contained city park as depicted in the video at the end of this post. The festival website has the official schedule up with a handy "My ACL" customization to share your picks and get updates.  I've also shared my to-do list below with my thoughts behind each choice (most have appeared on my new music playlists), however I'm going to have some tough decisions come Sunday's line up.

I've reconnected with a friend from my hometown who lives within "biking distance" from the park and I'm also armed with a nice list of recommendations from a local (that would be Josh Lambert of The Octopus Project and to use his favorite word during concerts, a very enthusiastic thanks!) I even have a tab opened to the Weather.com's 10-day forecast for the city, to see if I'll need to sport that lovely poncho look. It all looks great weather wise but what to pack? After checking out last year's fashions online, it looks like starting with messy hair is a must. At least that should be easy to keep going hours from gig to gig!