New Album Out From Blake Hazard (of The Submarines) 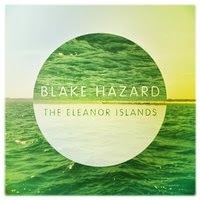 The last time Blake Hazard released a solo album was back in 2002 with Little Airplane. It seems she's on her own again, with a self-released collection called The Eleanor Islands, out July 9.  I fell for her former band, The Submarines, extremely hard with Hazard's authentic singing and plenty of infectious indie pop tunes. Her vocals are still strong and clear, but the sonic footing seems a bit unsure in these new songs without her former bandmate and husband, John Dragonetti.

I interviewed the couple before a show at the Music Hall of Williamsburg during a tour in support of their third full length album, 2011's Love Notes/Letter Bombs.  The couple was still mining their relationship for songwriting, a roller coaster of ups and downs that provided a genuine intention to communicate with fans, not just each other.  Their voices also complemented each other just like their personalities seemed to, a yin and yang of outgoing Hazard and laid back Dragonetti.

The video (directed by Simone Leuck) for the single off this new album, "Colonade," finds Hazard alone on a hotel bed evoking the past with a retro look topped off by her trademark blond braids.  I'll also post my favorite track off Hazard's SoundCloud page, "Energy And Consequences," but maybe that's because it has all the elements of a classic Submarines song.  Take a listen to the electronic flourishes over a standard band set up, soaring melody, and yes, heart on the sleeve lyrics about this new stage in life.

Fun fact: Hazard made a cameo appearance in Baz Luhrmann's recent adaptation of her great-grandfather's book, The Great Gatsby by F. Scott Fitzgerald!