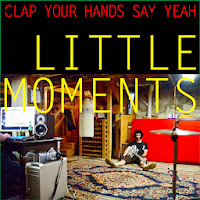 A reconfigured Clap Your Hands Say Yeah (CYHSY) have released an EP, Little Moments, ahead of a new album to be released next January.  Just one year ago the band's demise seemed inevitable during a show during the CBGB Festival in Times Square, shortly after it was announced that Robbie Guertin was leaving the band along with twin brothers Lee and Tyler Sargent.  That left vocalist Alec Ounsworth and drummer Sean Greenhaulgh (also a multi-instrumentalist and music producer) to either pick up the pieces or continue their solo projects, as dabbled in over the years since the band began.

CYHSY met while students at Connecticut College and self-released their self-titled debut album when it was unheard of doing so in the spring of 2005.  It didn't hurt that Ounsworth's vocals recalled David Byrne's neurotic urgency and the band offered blurry, complex but interesting songs with a danceable vibe. Using that initial buzz across the internet, the band continued to corner the indie rock market with 2007's Some Loud Thunder and 2011's Hysterical.

A week ago, a cryptic tweet by CYHSY told fans "very interesting news coming very soon" before today's release of four songs, along with some tour dates for the fall (see below).  As detailed on the CYHSY Facebook page, the tracks were created in Ounsworth's Philadelphia home studio.  There are two A-sides from the new album (although not final mixes, the band plans to work with Dave Fridmann of Flaming Lips and MGMT fame again for that process) along with two B-sides.  From the pulsing synth intro of "Little Moments" to the conversational snippets that gives way to a dance beat in "Only Run," it seems CYHSY has maintained that frenetic sound that could still border on joy. The two B-sides, “Heaven” and “Once,” offer spacey jams that easily bring the band back to life.

Link to CYHSY's Bandcamp page to take a listen and order up the EP along with other merch here. I was also thrilled to scoop up some tix to see the band (though reformed -- they've been on my concert bucket list for awhile now, along with Arcade Fire and Beck if you want to ask!)