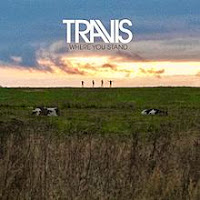 Scotland's alternative band Travis is back after a five year break with their seventh studio album, Where You Stand, due August 20 from their own label Red Telephone Box via Kobalt Label Services. This video for a single called "Moving" shows the group in the cold darkness, knitted caps and all, with their breath animated in real time (no post production either).  According to band's website, this is "to give the effect of plucking shapes and figures out of thin air." According to Motionographer.com, the London-based team of Tom Wrigglesworth and Matt Robinson, aka Wriggles & Robins, created the intriguing visuals.

It's a great video to watch on a hot summer's day.  The instrumental intro sounds like it could be any mellow indie song, until Fran Healy's vocals take hold and remind me why I love this band. He takes a soaring melody and strings it along, conveying a breathy warmth with every syllable.  It all seems so effortless.  Check out the video, along with some U.S. tour dates coming up this fall, below.