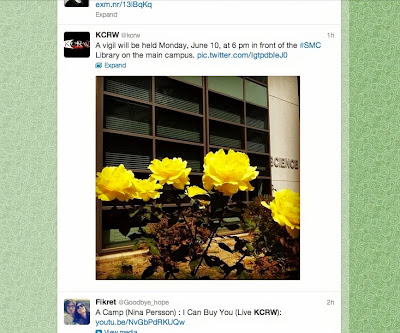 It has happened again -- a gunman with mental health issues killed family members (his father and brother) before loading up with rounds of ammunition and going to a school to see how much damage he could do with an AR-15 assault rifle (five victims dead, more injured and countless others affected emotionally by the randomness of the act).  This played out at Santa Monica College last Friday afternoon, after I was listening to my fave online radio station KCRW hosting a high profile, unique dj session by Radiohead and Atoms for Peace's Thom Yorke and Nigel Godrich on the weekday "Morning Becomes Eclectic" program (12 pm to 3 pm EST).  KCRW's Twitter and Facebook updates over the weekend focused on the shooting, instead of the usual music news and NPR headlines.  Then today there was a thank you for the fan of the of radio station who left sunflowers by the door and an announcement of a vigil to be held later this afternoon.  Another unfathomable, scary and all too familiar ritual following a shooting, bringing to mind the recent tragedy at Sandy Hook Elementary School, plus unfortunately many other acts of gun violence across the country. Something has to change...


Also today, KCRW's "Album Preview" program has posted Rogue Wave's fifth album, Nightingale Floors (out June 4 via Brushfire Records) for streaming during the week ahead.   Frontman Zach Schwartz (a.k.a. Zach Rogue) has an easiness about his vocal delivery, with a classic pop songwriting approach for his indie rock band that is based in nearby Oakland, CA.  I have already picked the first single,  a gem of a tune called "College," for my next playlist. Take a listen at the link here and be sure not to click out of the listening session early -- there's a nice hidden track at the end. 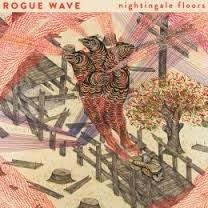 Track List:
1.   No Magnatone2.   College
3.   Figured It Out4.   Siren's Song5.   The Closer I Get6.   S(a)tan7.   Used To It8.   Without Pain9.   When Sunday Morning Comes10. Everyone Wants To Be You / Ready, Steady, Go (Hidden Track)
Posted by JaneJS at 12:16 PM
Email ThisBlogThis!Share to TwitterShare to FacebookShare to Pinterest
Labels: Brushfire Records, KCRW, Rogue Wave
Newer Post Older Post Home