Washed Out's Ernest Greene is ready to release his second full-length album next month, letting loose a single "It All Feels Right" that I already have on heavy rotation.  His critically acclaimed debut EP, Life of Leisure (2010), practically coined the term chillwave and the song "Feel It All Around" can still be heard during the opening credits of Portlandia.  I caught the band during the tour supporting 2011's Within and Without, a fave album that was a top ten pick for the year and the write up for this concert is one of my most read posts ever.

The new album, Paracosm (due out August 13 via Sub Pop Records), is filled with the synth magic expected of Washed Out and more.  According to Sub Pop, Greene employed over fifty different instruments for the new songs, including a collection of old keyboards (Mellotron, Chamberlin, Novatron and Optigan).  "I've grown as a songwriter to the point where I want to have more involved arrangements, and that's really hard to do with sampling," says Greene. "These machines were kind of a happy medium: the sounds have a very worn, distressed quality about them, much like an old sample.  But they also offer much more flexibility because they're playable." Greene has relocated from the city life of Atlanta to Athens, but returned there to record again with producer Ben H. Allen (Animal Collective, Deerhunter and Gnarls Barkley) at Maze Studios.

Available now is the single, "It All Feels Right," which opens with a shiny bling of sound until moving percussively into a sunny groove. In the lyric video, blissful thoughts are conveyed beyond the buried vocals, from "the sun comes out" to "music's playing loud," while deeply colored flora spin and turn. The cheery crowd noises brings in a human element as the song comes to a close. Greene says: "I knew from the beginning I wanted this record to be optimistic, very much a daytime-sounding album.  I think the last record felt more nocturnal in some ways.  This one I just imagined being outside, surrounded by a beautiful, natural environment." 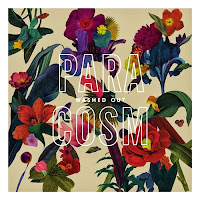