For months I've been saying to my video guy and spouse Paul how our NMMatterscorp YouTube channel was about to hit 50,000 views, so we should do something to celebrate when it happens (no one who knows me will be surprised to hear my first thought was a party!)  And low, the moment has come about without notice... with 141 live music videos posted over two and a half years, we have passed the mark.

Three out of the top four are from one epic night at Terminal 5 -- the first  LCD Soundsystem concert of their last week of shows ever.  These videos are definitely our personal faves of the entire collection. At the time, Paul hadn't heard the latest album much even though I had This is Happening in heavy rotation, so he didn't even know how the place would explode after the three minute intro of "Dance Yrself Clean" as the band took the stage.  (He says it was simply hard to hold on to the flip camera!)  Since it appeared two years ago, it has remained our top video in views.  Other LCD songs in the top five are "Time To Get Away" (#2) and the definitive "Daft Punk Is Playing At My House" (#3) with the requisite crowd surfer.

Coming in at number four is "Dream of the 90s," a hilarious yet sardonic song from the IFC series Portlandia.  Paul and I became fans of the show towards the end of season one, so when a live concert version came to town we hopped on getting tickets at the Music Hall of Williamsburg.  It was a treat to see Fred Armison and Carrie Brownstein actually playing on stage, with a few costume changes to portray characters from the show plus special appearances by Beastie Boys' Adam Horowitz and Hugh Cornwall of The Stranglers .  And our hometown own's Moby rounds out the top five with an acoustic set at The Brooklyn Museum after a talk with John Schaefer of WNYC's "Soundcheck."

Sometimes I'll elbow or give a thumbs up to Paul across the venue to make sure he gets the hits, but there's two gems in the top ten that are actually covers -- songs that just happened to appear on the night's set list.  Flaming Lips chose Emerson, Lake and Palmer's "Lucky Man" at Moogfest 2011, honoring Keith Emerson's iconic synthesizer solo, which this time was served up on iPad's Animoog app.  (Just one of my teary moments during the show and our cover photo on the YouTube site is from that night too.)  Another happy surprise came during the encore of The Dandy Warhols show at Webster Hall, when they busted out "This Will Be The Last Time" by The Rolling Stones.


Other videos captured those crazy times when members of the band ventured into the crowd.  There's one with Kim of Matt and Kim crowd surfing during their first headlining show at Terminal 5, another with Peter of Peter, Bjorn and John taking the "Young Folks" whistling into the fans at The Bowery Ballroom, and our personal fave with Eddie Argus of Art Brut continuing his rant about "Modern Art" across the floor at the Music Hall of Williamsburg.

Such memories!  We enjoyed it all and the act of sharing keeps things fresh in our minds too.  Special thanks to Paul for recording these opportune moments -- it's quite a collection. 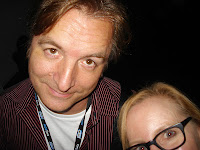 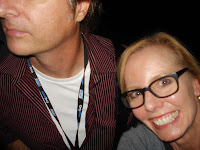