James Murphy of LCD Soundsystem at Red Bull Academy, May 27 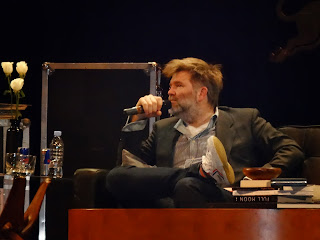 James Murphy appeared at NYU’s Skirball Center May 27th as part of this year’s Red Bull Music Academy, acting appropriately as the congenial elder statesman in front of a young audience.  He spoke of the early days of his band, LCD Soundsystem, and record label, DFA, when things moved much slower in New York City with “horse-drawn internet.”  Now DFA has grown out of its tiny homegrown beginnings, but Murphy explained how they “always wanted to do what we liked.”  A huge party at Brooklyn’s Grand Prospect Hall celebrated twelve years at the label, with many DFA bands in attendance “all super psyched and honored” to be there, according to Murphy. (His 90 minute dj set from the party is available to stream online here.)  When sparse applause answered Murphy’s question of who was also there, he likened the sound to Steve Reich’s clapping piece.


Having folded LCD Soundsystem in 2011, Murphy is now busy producing (Yeah Yeah Yeahs, Arcade Fire), and writing music for film as well as a play (solo piano!) He rarely posts on the band’s Facebook and only posts on twitter to say he doesn’t tweet, because “it becomes white noise if you don’t have something to say.”  So the crowd was eager to hear him espouse about music today and the creative process. Seated comfortably on a couch surrounded by band road cases, Murphy reached for water (not the Red Bull on a side table) to soothe a cough he says was picked up by “flying” and answered questions thoughtfully and unhurriedly.  His shaggy hair and beard have now completely changed over to whitish gray, as he donned a suit jacket with jeans and white sneakers. 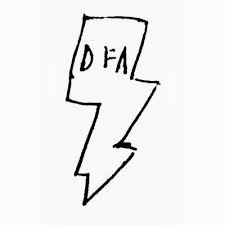 Murphy grew up in New Jersey, the last of four children who often got called by his older brother’s name.  One of his first memories is lying by the refrigerator in his pajamas to sing along to the electronic hum, rolling out of the way if someone came along to open the door.  He has always made music and has wanted to make music, counting records as prized possessions early in life (his collection now ranges between 14,000 and 15,000 albums).  Founding a label was more a necessity, since no one else would touch the dance punk sound Murphy and his musical pals were into at the turn of this century. The name DFA comes from his days of djing as Death From Above, and the lightning bolt logo is a doodle Murphy created once and has had trouble recreating ever since.  He wondered why indie labels were so anti-successful, as though bands were a “sell out for being able to hear vocals.” Murphy explained, “We wanted to make a label that was ambitious for weird stuff.”

With LCD Soundsystem, Murphy simply stated that they were “never meant to be a band.”  He asked friends to play on his songs, which eventually turned into a tour and it all somehow lasted a decade.  Murphy talked about early gigs at the Plant Bar (capacity around 75), where it was illegal to dance without a cabaret license, since “that’s how we kept New York City safe” back then.  LCD’s first song, “Losing My Edge,” came out as a single in 2002, but it took time to get out on tour and produce the self-titled debut album, released in 2005.  There were a few band rules, set up since Murphy “didn’t want to be one of those bands that you end up hating.”  These included pet peeves such as asking the crowd if they’re having a good time, encores, or overdone expressions referred to as “feeling it.” The rule about no sunglasses had to be repealed a few times in overly sunny locales or with setting suns on the horizon. 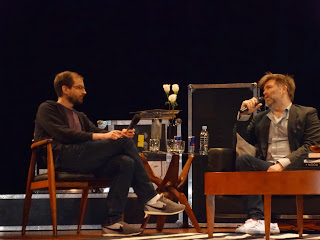 In being a frontman, Murphy knew he couldn’t be the David Bowie type he experienced as a young music fan.  He had to "deal with how [he’s] not compelling or charismatic.” So Murphy put his band members near him on stage, in order to reach over and bang a drum or hit a key on a synth.  The band and its music was all about the truth, allowing a direct relationship with fans even if they looked like (according to Murphy) substitute teachers. “There’s always that temptation to be something else,” he said.  As far as knowing when a song is done, Murphy said “It’s done when it’s out.”  Or use a two sided, flip-the-coin mentality, “If you don’t like it, fix it. And if you don’t like it, get out of the way.”

The easiest song for Murphy to write was the very first, “Losing My Edge.”  But the hardest was either all the songs on the second album, 2006’s Sound of Silver, except “New York I Love You,” which was a song he sang to himself for years, especially during tough times living the urban life.  Or it was “Dance Yrself Clean,” a seventeen-minute song that was edited down to nine minutes. (Revisit this song live as it began the band's first night at Terminal 5 March 28, 2011 on the NMMatterscorp YouTube page, our top video with almost 9,000 views. Write up of the entire night with more videos here.) Unfortunately, Murphy blew his voice out recording this last song for 2010’s This is Happening and had to go on a course of steroids to remedy the situation.

As far as deciding to end the band, Murphy said the dominant reason was pure instinct.  In the video here, you can see he chooses his words carefully to explain his decision to the dedicated fan base in attendance.  He also did not want to become a “famous person,” someone who could not move about easily in society without scrutiny on all levels.  And Murphy is too much of a people pleaser to enjoy pure collaboration, telling a “stressful” tale of working with Damon Albarn of Gorillaz and Andre 3000 for the Converse collection song, “Do Ya Thing” (released in February 2012).  However, the line “I am the shit” that Andre 3000 sings is actually from an encounter Albarn had with Brian Eno on the street.  Supposedly, Albarn asked Eno how things were going and Eno replied, “Everything I’m working on is coming out great.”  So the three of them wondered what would it take to say that and that line was repeated again and again. (Murphy thinks it’s the best part of the song.)

It’s clear that Murphy will continue to play a part in the music scene on his own terms.  After selling out Madison Square Garden (as captured in the movie Shut Up and Play the Hits), he seems to be still catching his breath.  However, he admitted to writing songs everyday and new equipment options in sound production continue to intrigue him.  “I’m not a tree that falls in the forest,” Murphy declared.  “I make music as a form of communication.”  So thankfully, we can count on hearing a lot more from him in the future.  Full interview on the Red Bull Academy Vimeo site here.