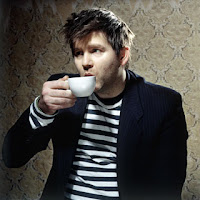 Terminal 5 had the word “toodles” across one side of the marquee for LCD Soundsystem’s week of farewells. The other side read “LOVE YA” with the disco ball signature of LCD to welcome fans waiting outside in the unseasonably cold March weather on the first night at the venue. The shows were put together after their April 2nd date at Madison Square Garden sold out in the matter of minutes to the chagrin of both fans and the band. Conspiracy theories abound but it makes for a good reason to extend the party.


Liquid Liquid was given the supporting slot as a thank you gesture for their influences. After three mishaps with bassist Richard McGuire’s plug the night got going. Their trancelike rhythmic nature with multi-layered percussion sounded similar to LCD’s funky dance grooves. The group’s claim to fame is providing the backing track on Grandmaster + Melle Mel’s 80s hit “White Lines (Don’t Do It).”


Members of LCD appeared individually to applause to begin “Dance Yrself Clean” off last year’s release, This is Happening. As everything went dark, Murphy arrived in a spotlight to a huge cheer in the audience. It’s clear he’s the mastermind behind the music but he also takes his frontman role seriously. Murphy crooned confidently, letting his seasoned musicians play without any intervention of cues. The stage was a sea of instruments, with keyboards hidden behind sleek white consoles to match the flashing strobe lights. There was also a male choir in the wings adding to the vocals. By mid-song the party began with hearty sing-a-longs at the chorus and wild dancing in the audience. Afterwards, Murphy thanked the crowd for being “amazing” and for simply coming to see them. He then described how the evening would be split into three sections so the band could rest in between sets and still make it through the night.


The band then kicked into “Drunk Girls” and the moshing continued. After “I Can Change” the group went back in time to “Time to Get Away” off Sound of Silver from 2007. Murphy explained how they were planning to do songs they hadn’t done in a while, saying “hope we remember them!” He also declared how it seemed fitting to be finishing up at Terminal 5 where their final tour began last year. Their hit off the band’s self-titled first release in 2005, “Daft Punk Is Playing At My House,” kicked into hyper-speed and the ending call of “All My Friends” made the opening set enough to make an evening complete.


But as Murphy said, there were two more hours to go. Throughout the evening Murphy was the generous host, introducing band members and special guests over and over. For the second set, a horn section and female background singers joined on stage, expanding the sound into instrumental jams. “Sounds of Silver” provided a highlight with the added choir and an elongated break in the middle.

The huge disco ball on the ceiling was finally called into action for the third set. LCD lit into “Us V Them” with the choir in full force, bending over the railing to rally the music. “You Wanted a Hit,” “Tribulations” and “Someone Great” were strong offerings with “Losing My Edge” closing things out. It was past midnight when the encore “New York I Love You” was presented as an elegant torch song, with Murphy’s voice echoing throughout the space. Three long sets and over three hours later, the show ended as a very fulfilled crowd filed out into the early morning chill.