When the balmy spring weather arrived early in NYC last week I strolled through Greenwich Village, taking my time to get to Mercury Lounge for New Build's early show at Mercury Lounge.  I had just met a friend/neighbor across the street from our old apartment building for a nice chatty happy hour catch up session, so it should have been no surprise that I would pass Rick Ocasek, another guy I used to see around the neighborhood when I lived there.  Some things never change I guess, even in NYC.

When I arrived at the venue, it was practically empty and the supporting slot of Reverend John Wilkins had not begun.  I spotted singer Al Doyle milling about and went up to say hello.  He admitted to being quite nervous that the place hadn't started filling up, so I told him how early shows in NYC aren't easy.  Doyle remarked how he hoped the scalpers didn't get all the tickets and I had to confess that's how I got mine (even though I'd be reviewing his band, I wanted to be sure I had a ticket).  The band added a second show the next night but that one sold out quickly as well!

I was thrilled to meet the guy after seeing him up on stage with two of my fave bands, LCD Soundsystem and Hot Chip -- that night added another fun show, seeing Doyle performing with his latest band. 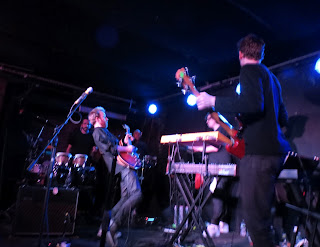 PopMatters review here and another video below.